The year 2022 had a huge number of highlights on the field, from the World Cup to new tournaments and new nations joining the ranks - and some being welcomed back, most notably after a gap of 27 years. 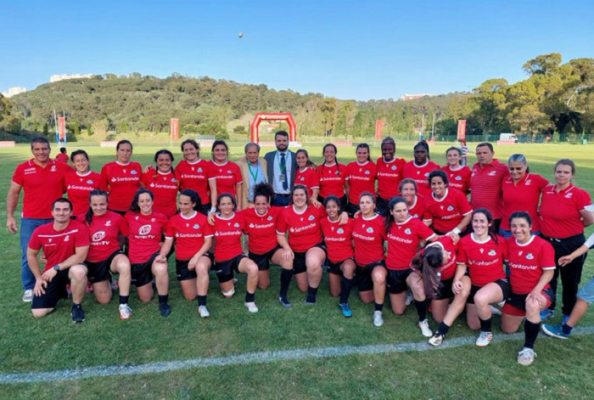 A personal favourite: Portugal return to test rugby, 27 years after losing 50-0 to Germany, with a 57-0 win over Germany

2022 has been a memorable year full of some remarkable rugby on the field.

In sevens, the return of Tim Walsh as coach of Australia came good with a deserved World Series, Commonwealth Games and World Cup triple. The first lacked rivals New Zealand for most of the series, but they were very much present at the other two.

At times Fiji looked like they might challenge this duopoly, reaching the final at the Commonwealth Games, and the USA won the Malaga round of the World Series, but no other teams on the circuit could match the consistency of the trans-Tasman pair, and after just two rounds of the 2022/23 series it is surely clear that one of the two will win it next year.

Great Britain also replaced England from the 2022/23 series but what effect that will have remains to be seen.

Away from the major world tournaments in some regions little changed. Brazil were – again – South American Champions, Mexico won the North American title at the end of the year (in the absence of Canada and USA); and South Africa won in Africa – but only by a single point in a dramatic final against Madagascar.

But in Asia, China won their first regional title for eight years, while Singapore won the Trophy – India losing in the final and missing promotion again. In Europe, Poland won their first ever Championship, while England won the second tier Trophy, having been relegated due to their non-appearance in 2021.

In another sign of the games growth most regions now have youth tournaments, with successful senior nations often triumphing at the junior level. The UAE were U18 champions in Asia (China and Japan did not enter); Brazil won in South America; France won the European Championship and Poland the Trophy; and Mexico won the North American title. Asia also revived their U20 tournament, with the UAE again champions in the absence of most of the big names.

Test rugby was dominated by the most successful and high profile World Cup ever, with a sold out Eden Park witnessing a dramatic final win for New Zealand, a result that also ended England’s world record 30 game winning streak.

The tournament was also one of the most competitive ever with significantly fewer one-sided games than in 2017.

Even more significantly the media coverage was massive, all of which raises the bar significantly for 2025 in England, when 16 teams will take part instead of 12.

In Europe, England won the Six Nations again – now moved to its spring-time place in the calendar. Spain won the European Championship, and Sweden the Trophy where Finland won their first test for 13 years. Portugal also returned to test rugby after a 27 year absence, and gained instant revenge on Germany for the 50-0 defeat in 1995 with a 57-0 win in Lisbon in April. This success encouraged them to enter the 2022/23 Trophy where they ended the year favourites to win the title, especially after their performance against Sweden in a end of year friendly that they narrowly lost 7-5.

New Zealand also took the Pacific Fours title in its first full year, Fiji won a memorable final in the Oceania Championship against Samoa, and Hong Kong were awarded the Asian crown after beating Kazakhstan.

World Cup preparations resulted in more tours than we have ever seen before, including Italy playing outside Europe for the first time ever when they travelled to Canada. South Africa and Ireland also went on tour to Japan for the first time, and South Africa, Madagascar, Kenya and Cameroun qualified for next year’s Africa Cup.

All of this activity shook up the World Rankings, with Portugal ending 2022 19 places higher (30th ) than they had ended 2021. Other big rises included Czechia jumping from 38th to 31st, Kenya from 29th to 25th, Fiji climbing from 21st to 16th, and Italy reaching 5th place, up from 8th.

Finally, there was more age groups XVs rugby than ever before. As well as the traditional England v France U20 fixtures (won, as is almost by tradition, by France), Scotland also re-formed their “futures” team, and South Africa and Zimbabwe met at U20 level for the first time, the ‘boks winning comfortably.

In addition the first Six Nations U18 festival took place in Edinburgh. It was not a tournament designed to produce a winner, though France appeared to be the strongest side, and Wales also impressed by going through their programme unbeaten.

A “Championing Oceania” U18 tournament, with teams from Fiji, Samoa, Tonga and Cook Islands, also took place in Auckland just before the World Cup. However, it received little or no publicity with no official coverage or match scores appearing, although we do know that Fiji beat Samoa in the final of the three day event.

The level of invisibility given to this event, ironically a tournament created with the aim of “inspiring young women, normalise and encourage female participation in rugby, grow 15-aside rugby … throughout the Oceania region” – was fortunately very rare in 2022. The challenge today is often keeping track of the waves of information now appearing, especially from World Rugby, the Six Nations and Pacific Fours unions, and not letting it dominate the stories from the rest of the world.

Women’s test rugby filled grounds again and again around the world, with player numbers rising (we are told, though World Rugby never actually publish the data), inspired by the players they see on their TV screens and read about on websites and in magazines.

Scrumqueens passed its 13th birthday during the World Cup, and it is world almost unrecognisable from that of 2009.

The game has come a long way, and with so many exciting initiatives ready for launch has a long way to go yet.