It was deeply disappointing to hear this week that test rugby in East Africa may be coming to an end following the cancellation of fifteens programmes in Uganda and Kenya. We met up with one of the leading experts on African women's rugby to discuss the implications of the decision. 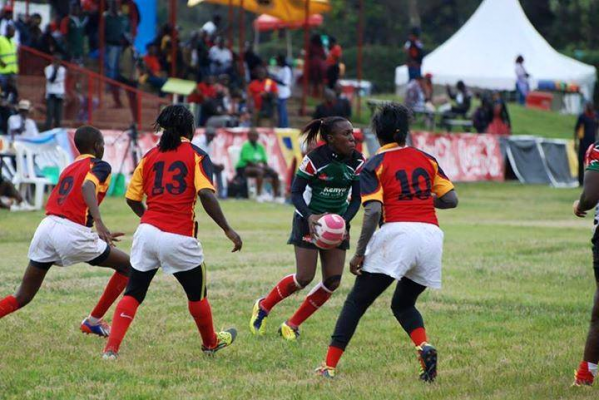 Can you remind us about the history of women's fifteens rugby in East Africa?

Women’s rugby in Uganda started in 2003 and all codes of the game were played from the start – 7s, 15s and the unofficial 10 aside code as well.  Uganda formed a 15 aside national team in 2005 [only a few months after South Africa] and are nicknamed “Lady Cranes”.  Their first international game was against Rwanda in Kigali who they comprehensively beat 0-92 and then 81-0 in the return match in Kampala. A  few months later, a Uganda "Select" team beat Kenya "Select" in a 15 aside game as a curtain raiser to that year's men’s Elgon cup in Kampala – even if the women’s game was not a test match it was such a success that it lead to the women’s Elgon cup in 2006.

Since 2006, the Uganda Lady Cranes have played the Kenya Lionesses almost every year in the Elgon cup, a fiercely contested home and away 15 aside competition between the two countries.

Uganda won the women’s Elgon cup in 2006, 2008, and 2013 while Kenyan won in 2009, 2010, 2012, 2014 and 2015.  There was no women’s Elgon cup competition in 2007 as the Kenya Rugby Union (KRU) pulled out it’s women’s team citing financial constraints, while the winner of the 2011 edition is still disputed after - to save money - the Uganda Rugby Union (URU) only initially committed to playing only one leg in Kenya (which Kenya won), However after discussions between the unions it was agreed that the return leg would be played, which Uganda won by a larger points difference. Kenya insisted that only the first game should count to deciding the winner of the trophy and, as the current holders, held onto it.

The 2013 Elgon cup doubled as a world cup qualifier, and Uganda won the clash on points difference and went on to play South Africa in a single qualifying game in East London where they lost 63-3.  Prior to the game Uganda had requested to host South Africa over two games but this was turned down by Rugby Africa who stated that a two leg qualifier would be "too expensive" and selected South Africa to host the single leg as they were "ranked higher" (although there were no official rankings at the time).

World Rugby did not allow the Elgon Cup winners to take part in qualifications for the 2017 World Cup. What effect did that have?

Yes - they said that we did not have a strong enough domestic competition to satisfy them. After the excitement and boost the game had in 2013 this was very disappointing and I think has resulted in both unions losing interest in the 15 aside code.

Is that why there was no Elgon Cup this year?

Partly, but also with Kenya were going to the Olympics both unions agreed to focus on 7s this year.

What did the players make of the decison?

There was a lot of disappointment on both sides of the border as there are very many players who will never have the opportunity to play 7s for either Kenya or Uganda and the Elgon cup is their chance to “shine” in the international arena.  Players who are able to represent Uganda or Kenya in 7s were also disappointed as 7s and 15s are two different games and bring out different “beasts”.  In addition, playing a 15 aside game in front of your noisy supportive home crowd, your friends and family is very different from playing in a tournament out of East Africa in front of a handful of fans.   Furthermore, the rivalry between Uganda and Kenya in any sport is intense and the Elgon cup is the oldest, longest running women’s rugby international competition in Africa.

Was the move to concentrate on sevens expected?

Not really - and certainly not in Uganda. Unlike most developing countries that chose to focus on 7s, Uganda has always given both codes equal weight to ensure that players not built for 7s would also have a chance to play and enjoy rugby through 10s and 15s on the domestic scene and also have an opportunity to play 15s for their country.  After the expected thrashing by South Africa in 2013, the Uganda Women’s Rugby Association (UWRA) was keen to put more work into the women’s 15 aside game and together with the UK based Tag Rugby Trust, organised a 15 aside friendly between a Uganda under 21s and a Sussex University Barbarians team from England (with Catherine Spencer and a few Ugandan international players as guest players) in Kampala in 2015, and another 15s game pitting a UWRA Select XV against TRT Tigers (English rugby league players among them Lindsay Anfield, and ex England rugby union internationals Catherine Spencer and Claire Purdy as well as a few ex Ugandan international players), which was played in Jinja, Uganda early this year.

The Ugandan sides lost both games very narrowly.  Catherine Spencer and Claire Purdy also conducted a forwards-based three-day camp prior to the game and the forwards enjoyed the attention that they were receiving for the first time in the rugby “careers”.  An under 19 15 aside league involving 5 teams was introduced for the first time this year and turned out to be very popular amongst the young players - previously, all under 19 competitions in Uganda were 7 aside or 10 aside rugby.

What will the effect of losing the Elgon Cup be on players in the two countries?

KRU and URU will be doing the Ugandan and Kenyan players a major disservice if they do go ahead and drop the women’s Elgon cup.  15s is a game for all shapes, sizes and speeds whereas 7s is a game for a specific type of athlete.  As much as 7s training is grueling and not for the faint hearted as a spectator sport it is more about glamour, exhibition and quite often individualism.  A single player can win a game for a team in 7s while in 15s that is very rarely the case.

There is no glamour in 15s and team work rules the day – props can be heroines instead of just the speedy sidestepping wingers.  Under 19 girls taking up rugby need role models and senior 7s players do not have the same impact on the slower, heavier under 19 girls that the senior 15 aside tight 5 players do.

Currently, Charlotte Caslick and Portia Woodman are among the international players admired by a lot of the senior 7s players and they also aspire to play like them.  However, 15s front row players and locks find it hard to get inspiration from Caslick and Woodman - instead Catherine Spencer and Claire Purdy inspired the Ugandan forwards who they worked with in the forwards camp earlier this year.

In Uganda, focusing on 7s may initially bring more numbers to the game – fewer numbers to make up teams, easier to coach, easier to learn, Olympic glory as a carrot – but it will eventually lead to a reduction of player numbers in the long run as URU does not have the finances to offer professional contracts to lure people into rugby or players from other sports to 7s.  In order to develop the game in Uganda, both 15s and 7s must be allowed to grow side by side as players play because they love the game and a myriad of other reasons and not solely because they want to be Olympians.

"I have been blessed to work with the Kenya Lionesses last year", he said, "and Women's Rugby in the country is really growing very quickly. Paula Lanco, Director of Women's Rugby, and Nicolas Aballah, head of development, are really doing great work and with the the newly introduced 15 a side competition in Kenya will reap its rewards soon.

[But] one thing is for sure Africa needs is an annual Africa Cup competition to nurture the talent and grow the game on the continent to get teams from Africa to close the gap on the top teams in World Rugby."