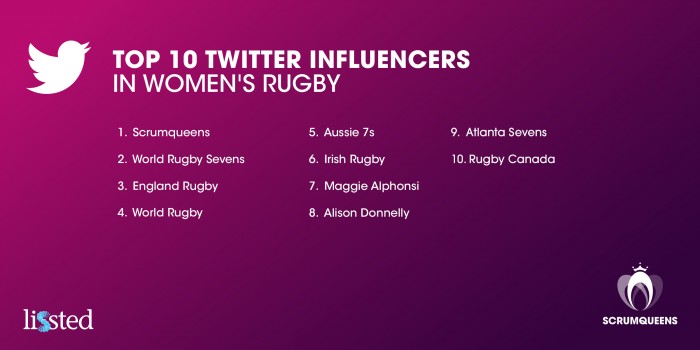 Lissted ranks users based on the relevance of their Twitter relationships and interactions rather than the number of their followers, and last month the platform applied its algorithm to the top women’s rugby related Twitter accounts in the world.

The data included over 500,000 follower relationships and tens of thousands of retweets, replies and mentions by these accounts and after crunching the numbers, Lissted came up with the top 100 influencers in the women’s rugby community with @scrumqueens coming out on top.

Commenting on how Lissted’s approach differs to other influencer tools such as Klout, founder Adam Parker says, “Most tools focus on who produces content and conversations on a topic. This places too much emphasis on who’s noisy, and noise doesn’t always equal influence. It’s a lot harder to get a relevant and influential Twitter user to follow you, than it is to generate tweets on a topic. If you’re someone who has a fairly modest Twitter following, but those followers include the key influencers in your field – and, even better, they’re replying to and sharing your content – that implies you’re far more influential than your follower number alone would indicate.”

So what does this tell us?

Firstly it tells us that British players and organisations have a significant reach on Twitter and are likely connecting with a wide range of stakeholders in the game.

Take the top 10 most influential individuals for example. Ex England player Maggie Alphonsi is top of the list and that shouldn’t be a surprise given her growing media profile and likely connections to highly influential names and organisations in rugby.

As the author of this piece, I was somewhat surprised to be listed second but then Lissted highlighted that my relatively small following of 3,200 includes over half of the top 100 influencers including Irish Rugby, Maggie Alphonsi,  USA Rugby and  Rugby World Magazine.

The leading organisations beneath @scrumqueens are mainly governing bodies, clubs and ex and current players though there are also some journalists on the list. Again English clubs and organisations fare well and the other women’s rugby specific accounts include American site YSC Rugby which is ranked 9th overall.

One thing we can tell you is that if you have a message you want to get out to a wider women’s rugby audience, then you could hardly do better than speak to us!.

So, the question you all want to know then – who’s top of the charts?

The top 100 Influencers in Women's Rugby (organisations and individuals)