Scrumqueens.com - 7s squad of the decade

The decade of Scrumqueens.com has also been the decade of sevens. As part of celebrating our 10th birthday, we choose our sevens squad of the decade. 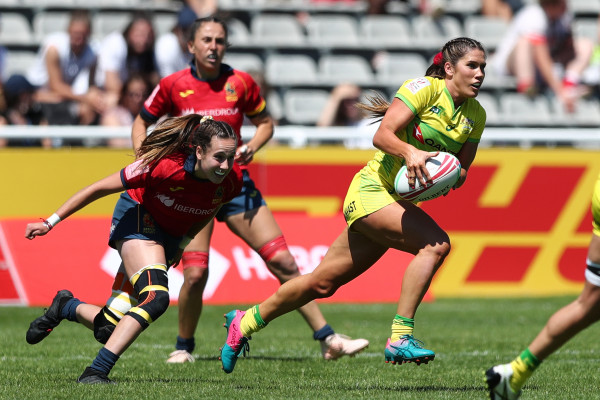 One of the first stories we covered was the inclusion of sevens in the Olympics, leading onto the start of the World Series from 2012, and the first Olympics tournament in 2016. During that time we have been - with the help of our readers - selecting an annual world sevens squad since 2012. So who will our squad of the decade be?

The only qualification for selection was to have appeared in at least one of our annual squad. In some ways selecting this squad was easier than the 15s team as the first seven players pretty much picked themselves, having appeared in more than half of the annual squads..

Charlotte Caslick and Portia Woodman are, in their respective countries, if not worldwide, the very personification of the sevens game.  An Australian or New Zealand team without them in it seems somehow incomplete, which is why they have been near ever-presents in our annual squads.

Jen Kish prior to her retirement was Canada’s equivalent of Caslick and Woodman. One of the most recognisable players on the circuit, and one of the most fearsome. Strength, speed and power – she had it all.

But Canada has also produced Ghislaine Landry, almost the opposite of Kish, who was apparently told she was not big enough for rugby. If that tale is true then she has proven them wrong 1000 times over, or maybe that should be 1,186 times over as the circuits all-time points scorer and the only one into four figures.

As well as Woodman, two more of our near “ever-presents” also come from New Zealand – Sarah Hirini and Kayla McAlister. The only reason Hirini has “only” appeared in five our out annual selections is because she did not make her debut until 2013 – since 2014 we has been an absolute shoe-in. McAlister made her debut the year before, became World Sevens Player of the Year a year later and was always a pick in our teams until family pressures reduced the number of her national turnouts.

The final near “ever-present” has been Spain’s Patricia Garcia, the player who it seems can do everything. Being from one of the smaller teams must mean so much more pressure to perform, but Patricia never lets her team down.

That left us with five places – and its here things really got tough.

That said, Tyla Nathan-Wong – the leading try scorer in the history of World Sevens – was an obvious selection. Only 18 when she was first selected in 2012, she has appeared in most of our teams since 2014 and probably will continue to do so in the next few years.

Former Russian captain Nadezda Kudinova dropped out of our teams a couple of years ago when she stepped back from the game, otherwise she would also have likely been an automatic selection. A hugely exciting player, the exciting news is that coincided with our deliberations is that (now Nadezda Sozonova) she is back in training again. Russia have not been quite the same without her. Our squad would not be the same without her either.

A squad needs balance and our annual squads have been critcised in the past for not having enough forwards. Marjorie Mayans - "la reine du plaquage" - fits the bill perfectly. She had a fearsome reputation in 15s before becoming part of France's late-late conversion to sevens, and carried that on into sevens where she has been a central part of the French team reached the Qlympics final of the World Cup last year.

In the end we came around to thinking that in a way we are telling the story of a decade of women’s sevens through the leading players, so in addition to being brilliant for the last couple of places we asked which players who were the most totemic, most iconic players who represent not just themselves but also the last ten years?

And we came up with two names.

Kelly van Harskamp was always the “flying Dutchwoman” and arguably the core around which the great Dutch experiment was built – that time ten years ago when the Netherlands created the first professional women’s rugby squad in a bid to steal a march on the world and win a pace at the 2016 Olympics. In the end the Dutch just missed out – the Games perhaps coming a year or two too late for them, as by 2014 the rest of the world had caught up and overtaken them, and Kelly retired from game for family reasons.

But the game had also changed and Kelly and the Dutch, with the game based on speed and artistry, had also been pushed aside.

And it is Baizat Khamidova who represents that change. We first became aware of something new in May 2012 when Russia came to the IRB London Challenge – effectively a test event for the World Series that started the following season. It was immediately apparent that they were playing a different sort of sevens, a sevens of not just speed but also power, and strength, and eye-watering hits. Baizat was not really part of that initially – her sister Navrat was – but by the time the World Series came around she was, with the addition of speed too. And Baizat is still there today, instantly recognisable, hugely talented, and just a little bit scary to try and defend!

Here, after all that, is our 12-player sevens squad for the first Scrumqueens decade. Although we were not considering nationalities, in the end it includes four New Zealanders, two Canadians, two Russians and one player each is from Australia, France, Netherlands and Spain, which while not perfect (none from the United States or England as I am sure will be pointed out) it is a reasonable represention. In the end with only 12 places you cannot to include everyone!

If we are still here in 2029 maybe we'll see some names from Asia, or Africa, or South America?