Six Nations Team of the Championship

After a thrilling Championship, we choose the players we think deserve to make the women's Six Nations team of the tournament. 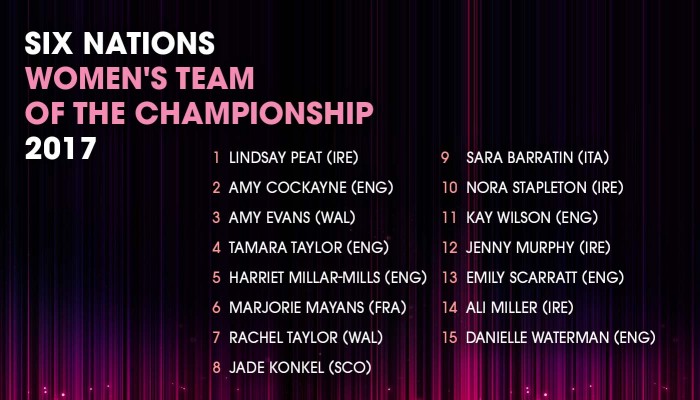 1 Lindsay Peat (IRE)
Although she is still learning her trade as a relative newcomer to the test game; Peat's powerful running and threat in open play will make her a force to be reckoned with at this year's World Cup. Rochelle Clark also deserves a mention here - when it counted most against Ireland she was outstanding and we've been impressed with Elisa Cucchiella too.
2 Amy Cokayne (ENG)
The young England hooker forms an impressive double act with Vicky Fleetwood and she edges it for her all round power game and excellent impact from the off this season. She is some prospect for the long term for England. Leah Lyons also impressed for Ireland.
3 Amy Evans (WAL)
Wales will be frustrated with some of their results, but pleased with how their set piece has gone this season with Evans proving a formidable cornerstone and finding her way to the try line. Ailis Egan is another player who impressed in this shirt.
4 Tamara Taylor (ENG)
5 Harriet Millar-Mills (ENG)
There have been some impressive showings at lock this season - notably the Ireland duo Maz O'Reilly and Sophie Spence as well as Mel Clay and Deborah McCormack, but it is impossible not to select the England second-row pairing together given how well they work off each other. Taylor, who passed 100 caps in the competition, is the ultimate engine-room work horse while Millar-Mills has shown incredible athleticism in the wider channels. They work brilliantly as a pair.
6 Marjorie Mayans (FRA)
France's 2017 campaign has been characterised by experimentation by the new coaching team, and none of their changes were more successful than ​the move of this former centre to blindside flanker. Her power, speed and strength gave the French pack a new dynamism. Mayans acknowledges that she still has much to learn about her new position, but has made an impressive start. Alex Matthews, Ilaria Arrighetti and Ciara Griffin also impressed.
7 Rachel Taylor (WAL)
There have been some formidable performances at openside flanker in this tournament - Marlie Packer, Menager and Claire Molloy to name just three; but Taylor's work rate, physicality and rugby smartness always shines through for Wales. A wily player anyone would want in their team.
8 Jade Konkel (SCO)
Without doubt this is the toughest position to choose and any of Sarah Hunter, Shona Powell-Hughes, Paula Fitzpatrick and Safi N'Diaye can count themselves unlucky not to be named, but in a season where Scotland rather rose from the dead, it was Konkel who was key and she gets the deserved nod here.
9 Sara Barratin (ITA)
The Italy captain is a brilliant playmaker and is a contender for player of the match for her side in every single test game. Jade Le Pesq had a very good first season debut at 9 but it is Barratin who caused teams the most hassle from the base this season and she deserves her spot.
10 Nora Stapleton (IRE)
While she may be disappointed with her kicking game at times, Stapleton has been a hugely positive influence on the Irish team this season, choosing good attacking options; making the right decisions and controlling tight games very well. When Niamh Briggs returns the two will form piviotal figures for Ireland's decision making.
11 Kay Wilson (ENG)
While the seven tries she scored v Scotland will live long in the memory, Wilson has been excellent throughout the entire Championship with her brilliant finishing and powerful running making her a nightmare to defend.
12 Jen Murphy (IRE)
We've shifted Murphy to inside centre so that she can partner Scarratt in what would be an incredible partnership if it ever unfolded. Murphy's power tackling; brilliant running lines and all round work rate means she might make it into just about any test team on current form. Her Irish partner Sene Naoupu also had a fantastic season here as did Elodie Poublan and Scotland's Lisa Martin has also caught the eye.
13 Emily Scarratt (ENG)
She will be frustrated with her final kicking stats, but Scarrat has been one of the standout individuals of the tournament. Her ability to change a game thanks to her timing, power and running lines make her almost impossible to stop, while her passing range is also world class. Caroline Ladagnous is also a worthy mention here.
14 Ali Miller (IRE)
Ireland's powerful winger looks a threat every time she gets the ball and she has been a key figure this season, as she will be throughout the World Cup. Italy’s Michela Sillari is unlucky to miss out here. She’s had a fine season too.
15 Danielle Waterman (ENG)
Manuela Furlan and Jessy Tremouliere have had strong seasons, but it's Waterman who defenders hate to face most - making her the automatic pick in this position. Her footwork, leg drive and effort in contact are superb for a player of her size. A terrific player to watch. Chloe Rollie is another to be well worth a mention .