By John BirchElche in Spain was the venue for a fascinating one-day tournament warm-up tournament for the international sevens season this week. 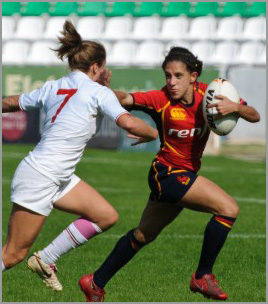 Played over the All Saints Day holiday, the womens tournament featured four of the top six teams from the summers European Championship - Spain, Netherlands, France and Portugal - but it was Spain who had most to prove. Chosen by IRB to take part in the first official Dubai Sevens (after New Zealand declined an offer to take part), Spain needed to win the tournament to justify their selection.

Against some of their biggest rivals, including the Dutch team on its first outing since turning professional, this would not be easy as Spain found in their opening game. Coming from an early French score, tries from Maria Bravo and Vanessa Rial seemed to have won the game for the hosts before a late converted try forced the Lions to accept a draw.

With the Netherlands showing their strength with a 35-7 win over Portugal, Spains second game against the Dutch was crucial. Again it went down to the wire, with the Dutch leading 10-5 at the break. However, early in the second half Julia Pla broke through for a converted try with Spain holding onto the two point lead to the end.

When Netherlands then beat France 17-0, Spain knew they had qualified for the final before their final pool game. However, The Lions have strength in depth and (with Rial and Bravo rested) tries from Marta Caban, Barbara Pla and Laura Esbri all converted by Patricia Garcia were enough to record a 21-10 win over Portugal.

And so to the final. The first half was a terrific battle, with the Dutch taking the lead twice only to be hauled back twice by tries from Julia Pla and Eli Martinez. However, Garcia was now having wonderful day with the boot, giving Spain a 14-10 lead at the break. The second half belonged to Spain two tries from Barbara Pla, and another Garcia conversion giving Spain a comfortable 26-10 win. France finished third, beating Portugal 14-0 in the play-off.