Spanish rugby website Veintidós (“Twenty-two”) have published a great short interview with Spanish coach with  José Antonio Barrio (aka “Yunque”) who give his reflections on a successful European Championship campaign, his hopes for Spanish team of 2021 – and his frustrations at the lack of support offered by world rugby authorities. 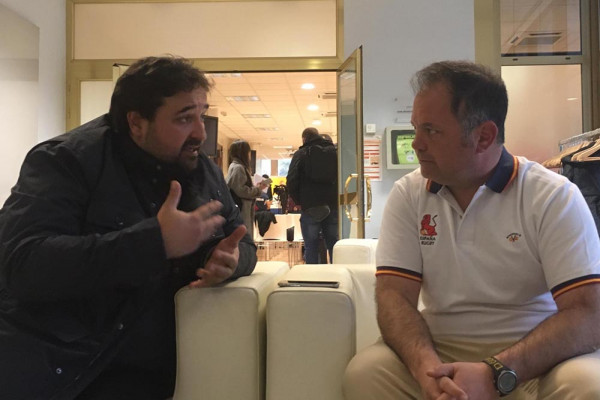 Based on an interview by José María Ibáñez for Veintidós, and translation by Naeryn.

A couple of minutes after a reception by the Secretary of Sports, Jose Ramón Lete for the Lionesses  the European Champions - at the headquarters of the Sports High Council., Spanish national coach, Jose Antonio Barrio - "Yunque" - spoke to José María Ibáñez.

He starts by analysing the Spain’s performance in the European Championship in Brussels. “We knew we had a team with good players. These girls arrived here having played for more years than their predecessors had, and that shows in their fundamentals and individual qualities. But we had to see if they were a competitive group,” he points out.

What was surprising was that, even though they were the highest-ranking team of the tournament, they weren’t thought of as such: “Netherlands were considered the favourites by everyone, but we did well with that victim role because the girls came out very focused and put in practice everything we had spoken about. In the end the rugby puts everyone in their place and the 40-7 scoreline made it clear that Spain were the better”.

Yunque took positive a conclusion for the future, looking beyond the attainment of the title. “This year there’s a Sevens World Cup and we’re sure it will be a success, with the participation of players that face the end of their brilliant careers. Now it’s time to prepare this group for the 2021 World Cup. There’s time, there’s talent and we know they are competitive. We have to get it right with a good planning”.

However, the wider context isn’t very favourable for the Lionesses, with the structures that exist right now in the international schedule. “Getting into the Six Nations isn’t possible because it’s a private competition. But we’re sending a paper to Rugby Europe and World Rugby describing our situation. It’s important to create a structure that will allow us to develop”, he says with a somber face.

For the national coach the solution is clear: “World Rugby must develop a plan for a Tier 2 structure for women’s rugby, as it has done with the men’s rugby. Otherwise, there’s danger that the gap will end up becoming too wide to bridge”.

"We need World Rugby to tell us their plan for the second tier of women’s rugby,"