Starting on June 9, some of the key contenders for this year’s Women’s Rugby World Cup will kick off a six-game test series in New Zealand, offering some significant signposting about how they will fare in Ireland later this summer. We look ahead at how each team is shaping up. 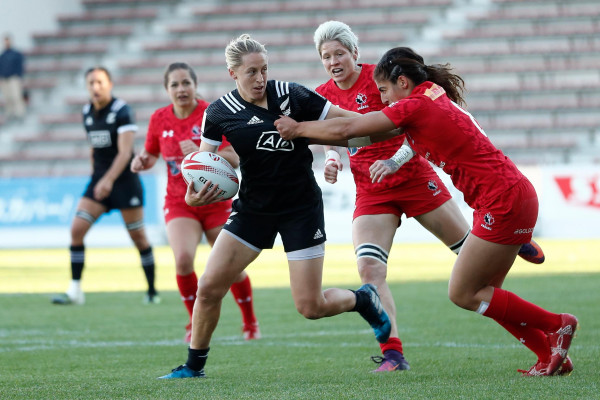 In the eight tests since their disappointing 2014 World Cup campaign, New Zealand are unbeaten - a record that will have sent confidence surging through a side relishing the opportunity to play a rare test series on home soil.

Head coach Glenn Moore was brand new to women’s rugby when he took over two years ago, but he has done a fine job of building depth in his squad while keeping a strong core of experience. One success also includes working closely with the NZ sevens set-up – efforts which result in numerous contracted sevens players being made available for the World Cup this summer, alongside ensuring that all of them met minimum requirements of playing time in the 15s game before selection.

Two uncapped players have been included in the squad for the upcoming series, with North Harbour's Rebecca Wood and Auckland's Theresa Fitzpatrick involved, while Moore has left out highly experienced players including Emma Jenson; Carla Hohepa and Stephanie Te Ohaere-Fox – who remain part of a wider World Cup training squad.

There are plenty of experienced faces in the squad – sevens players apart- including Rawinia Everitt, Fiao'o Faamausili  and Renee Wickliffe, who all offer bucket loads of World Cup experience.

Given the high profile nature of some of the games – including a Lions game warm-up – expect New Zealand to be more fired up than ever. Getting knocked out of the World Cup hurt; and playing second fiddle to the profile of the sevens team (despite their good relationship) means this series offers a huge chance, not just to go to Ireland as favourites but to build more support back home for the Black Ferns brand.

With a successful Six Nations under their belt, England travel to New Zealand looking most of all for consistency in their performances across the three test games.

At times they were sublime in Europe earlier this year – their wins over Scotland and Wales included some stunning attacking rugby – but as England sought to find their best combinations in a World Cup year, there were wobbles too.

Simon Middleon has chosen a highly experienced team as expected, though there is disappointment that talented backs Claire Allan, Fiona Pocock and Amy Wilson Hardy are injured while the unfortunate Laura Keates loses out completely on the World Cup picture though her injury.

Some 15 of the 28 players named were in England’s 2014 Women’s Rugby World Cup-winning squad, with no uncapped names travelling.

Middleton also goes on tour with the benefit of major investment in the team made by the RFU in this World Cup year, with his now professional squad having had six weeks of training together ahead of the trip. That should give them a significant advantage – though rarely is sport qute so simple as cold cash triumphing.

But England should be confident. This is a very strong squad with bags of talent and the World Champions are getting a wonderful opportunity to assess just how tough defending their title will be in Ireland this summer – with Canada and New Zealand both teams well capable of grabbing it from them.

Players to watch include Harriet Millar-Mills who is in the form of her life in the second row and  wing Lydia Thompson, who will get a chance to stake her World Cup claim after her 2014 campaign was cut short through injury – and she may well get plenty of game time given Middleton has named just two out and out wingers.

Canada’s head coach Francois Ratier has not had the luxury of including crossover sevens stars in his squad like the other three sides he will face. Rather, Canada’s players had to make a choice between the lure of a sevens contract or the chance to play at the World Cup (without payment) – a real shame given some of the talent it denies him.

Nonetheless the players who chose 15s include Kelly Russell and Karen Paquin – two of the best players in the world, so Ratier still has a wealth of talent to choose from.

He’s gone for a veteran squad with 14 of the players who saw action in the 21-9 loss to England in the final of the 2014 Rugby World Cup included.

Brittany Kassil is the only uncapped player included.

After an up and down European tour last year – where Canada played three tests with very little recovery time in between – Ratier will be hoping for more consistency in New Zealand.

Given New Zealand and Canada are World Cup pool opponents, that specific test clash will be particularly fascinating.

When you consider that with just 13 tests each, Sharni Wiliams and Cobie-Jane Morgan are the two most experienced players in this squad, you get an idea of the uphill task facing Paul Verrell’s squad in this series.

With sevens taking priority in recent years in Australia; the women’s XV test programme has been left behind. Australia have played just two test games – a shocking neglect of the women’s rugby test programme by the ARU and a lack of investment that leaves them falling further and further behind in the 15s game at this level,  while their sevens game soars.

Those two tests, against New Zealand last year, showed how much of a gap they have to plug in test rugby with the first result throwing up a 67-3 hammering. However, Australia are nothing if not hugely naturally talented and tenacious – and always well coached – and their gusty second test display (losing by a more respectable 29-3) tells you that they may overachieve this year, despite and not because of the investment in their programme.

Those tests told Verrell that he needed a more physical squad to withstand the toughest test games and so he has chosen a more robust squad for this series.

Alongside the new faces are seven players who debuted on last year’s tour and they will team with the experience of captain Ashleigh Hewson, Rebecca Clough and Cobie-Jane Morgan as well as Sevens co-captains Sharni Williams and Shannon Parry.

Verell explained: “I think we realised that the tour in a couple of weeks’ time is going to be really tough. We’re playing three teams well above us in the rankings. We’ve probably taken a bit of a punt with some girls thinking they’re going to step up and be physical, they’ll keep us in the contest a bit more than what we had previously.”

Verell has also signaled in advance some of the positioning shifts he will make comfirming that he Hewson will move from flyhalf to her more preferred fullback role with first crack at the 10 to go to Queensland’s Nella Hake, who impressed during the nationals on the Gold Coast..