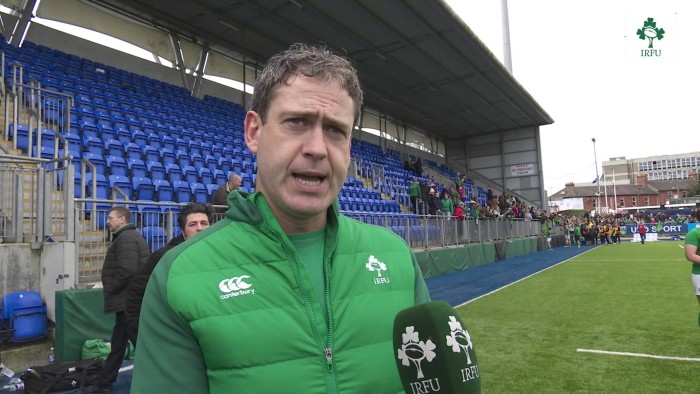 First things first and Ireland's women's rugby head coach Tom Tierney will be conscious that his side must find form and fast in this Six Nations if they are to go further than the semi-finals of their home Word Cup later this year.

A third placed Championship finish last season preceded a long lay off for Ireland’s 15s players as the focus switched to 7s and an attempt at Olympic qualification. Three tough test games in November - against England, New Zealand and Canada - all brought losses, the latter two by comfortable margins.

Against Wales in a warm-up two weeks ago, Ireland lost again, in perhaps an indication that in testing themselves against the best in November, Ireland may have got out of a vital winning habit.

“The Wales game was our first hit-out since November tests and we’d done a lot on the field so it was good to get out there," Tierney told us.

"We got 28 players on the pitch which is really important. The areas we had been working on specifically we were pleased with at certain time but there was a lot to work on, which is normal. That is to be expected in your first game of the year so it will focus the minds leading into that first game against Scotland.”

As for the November internationals, Tierney is unfailingly upbeat.

“The best way to learn is the hard way and to play against those types of teams in November, who are arguably the best teams in the world, was beneficial, even if the score lines didn't go our way. Those games could be worth their weight in gold because we will have learned so much from them.”

With Scotland on the horizon this weekend, Ireland have a good opportunity to get off to a positive start even if they are without the experience of players like Sophie Spence who is returning from injury. A good start would be ideal given Ireland have home advantage in their toughest two games against France and England - a schedule which gives them a decent shot at a third title.

“First off it’s Scotland and that’s a dangerous fixture. While they didn't qualify for the World Cup, they are extremely well coached and they will be waiting for us so we have to be ready.”

“Traditionally in the men’s game this was always the year to try and win a Championship or a Triple Crown but the quality that is there in all of the six women’s nations means it’s really hard to say whether it’s a good or a bad year to win anything.”

Tierney could be forgiven for having one eye on the summer and he will continue to use the Six Nations to depend Ireland’s player pool. With 16 new caps getting on the field in the November internationals, he’s picked another five uncapped players for the Championship.

With a high profile in Ireland for women’s rugby, Tierney believes it’s the most exciting time every for the game there.

“The profile right now is absolutely brilliant. The announcement of us getting the World Cup - the exposure of that has sky rocketed and the IRFU are doing a really great job in promoting it. The preparation for that is already well under way and it just brings the game into the forefront of everyone’s mind. The quality we are trying to play I hope will add to that.”

“The games has had so many developments on and off the field since I have been involved in the last few years. Getting the World Cup and having all of the games on TV for the Six Nations and that is going to turn a corner for the women’s game. It’s a brilliant but necessary step for the next step for the game.”