The twin sisters of French rugby 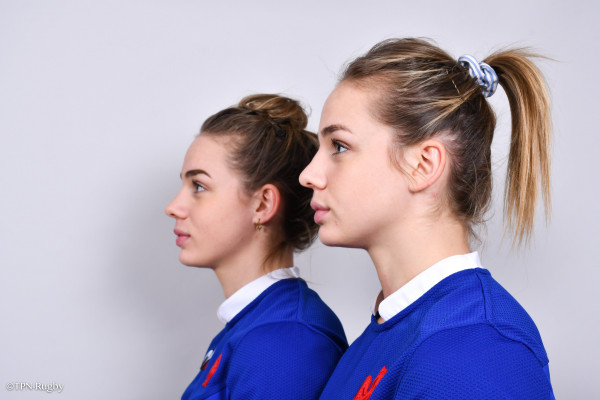 Inseparable in life, united in the passion of rugby, Romane and Marine Ménager tell us their unusual story (Photo: Theo Navarro - TPN. Rugby)

Twins, best friends and teammates. Romane and Marine Ménager are among the few sisters to break into their sport: rugby. An extraordinary journey that they told us in an interview as touching as it was amusing.

Romane and Marine Ménager have, as one can imagine, a "merged" relationship. The two sisters have always spent most of their time together. "When we were little, it was a little less obvious because we shared more activities with our big sister Caroline." But rugby has definitely made the twins inseparable! Before discovering the oval ball, Romane practiced judo and Marine was in a big, airy multi-sport centre. After an introduction to rugby at school, Caroline enrolled and they followed suit. Since the age of 7, rugby has been their passion!

"It strengthened our relationship"

Selected to compete at the highest level, Romane and Marine were able to count on their unique bond to feel confident. "It always feels like you're in your family cocoon. It's hard to get away from your parents when you're only 15, but we were lucky enough to be together."

There is no way for them to talk about rivalry, "at least negativly". "On the contrary, we've always turned it into something positive," says Marine. "When one was better on physical tests, for example, it made the other want to push even harder to be at the same level."

Yet, at the age of 19, Romane was selected for France, but not Marine. "That's when I got a shock. I thought it was a shame not to go on this incredible adventure with her”, explains Marine, “I wanted to move to join her in the squad. On the other hand, I have never felt lesser than my sister in the eyes of friends and family and I have never had the impression that they may think that my twin was better than me.”

It is not easy for the sisters when they are compared.

"It's heavy," Romane admits. “Since we were little, people comment on our personalities. In rugby it's even worse!  They always notice which of us has had the best tournament or the best match.”

Forced to ignore this continual judgment, the two sportswomen know on what advice is important.

"We only take into account the comments of our coach and the staff."

However, these systematic comparisons and differences in level are more difficult for their parents to manage.

"We know it's part of the game. On the other hand, they are not really from that world and sometimes have difficulty positioning themselves.”

At the 2017 World Cup, Romane was selected for the national team but not her sister. "Our parents weren't sure if they should be happy for her or sad for me. But now they are doing very well and luckily they are there! “

Both sisters have always been supported in their decision to play rugby. "We live in a place that's still 'old France', where little girls are supposed to do dance or more classical sports. Our parents never forbade us to play rugby, on the contrary. For them, as long as we did a team sport, it was very good.”

Playing against each other? "Never!"

Since childhood, Romane and Marine have played under the same colours. They are currently both playing for Montpellier. It is unimaginable for them to play in two different teams.

"Even in training when you have to play against each other you grumble," laughs Romane, arguing that their style of play can even be altered. "Unconsciously we go more carefully. If you usually like aggression and the contact, when you have your sister in front it is more difficult. It is impossible to give 100%”.

However, this bond that unites them can have negative points.

"We are emotionally very connected," they agree. "If one comes out with an injury in one game, the other is going to have a hard time dealing with the situation. Our teammates, who know us very well, will have a very important role in helping us get back into the game," at least, if they do not mistake their first name... because on the field as well as outside, it's hard to tell them apart.

"In the pictures of us as children it would be hard to tell us apart."

The sisters have thought hard about how to distinguish each other. "At that age, we put different coloured stripes on our helmets" and today it is thanks to their hairstyles that their teammates can try to recognize them. "In practice, it is sometimes impossible to distinguish ourselves apart, but we no longer try to make a difference. So, even if you have the wrong name, it doesn't matter, you answer for both!”

What is her highest quality? Altruism.

The biggest difference between her and you? Our temperament. Romane is calmer than me and more shy.

What is its highest quality? Honesty.

What are the differences between you and her? I'm more emotional than Marine and more shy. She finds it a lot easier to talk to people while I'm too reserved.

Any tips to tell you apart? Our hairstyle! Marine always has a bun and I have a ponytail. It's not done on purpose, but it helps to tell us apart. I also have rounder features than my sister.

Any tips to tell you apart? "Our hairstyle! Marine always has a bun and I have a ponytail. It's not done on purpose, but it helps!"