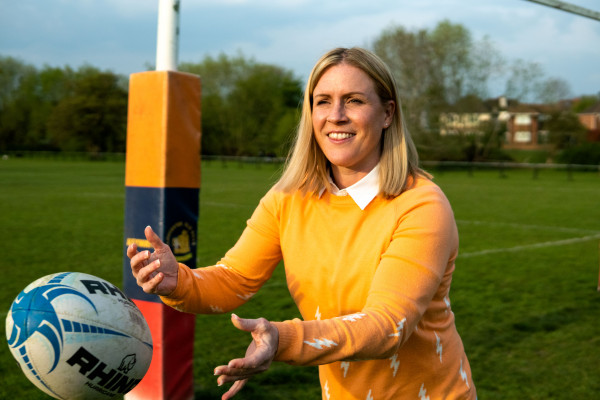 The 36-year-old became the subject of online abuse following her men’s Six Nations commentary debut last October, leading to a period of reflection amid weeks of feeling ‘really low’.

But a determination to not let trolls ‘control the narrative’ inspired her to keep picking up the microphone and the former Red Roses full-back will be pitchside this weekend as England goes for Women’s Six Nations glory against France.

“When I first started commentating, I would look online straight away to see the reaction and go down rabbit holes, getting more upset at what I found,” she Waterman, who has recently told her story in a documentary called Finding Her Voice, produced in association with HSBC, which showcases her journey from the pitch to the commentary box.

“You get into that habit as a player. I would not even acknowledge the positive ones; I would be looking for the negatives and it would just spiral.

“It’s really difficult to work out the best way of dealing with it. You want to showcase the idiotic comments being made but at the same time, you are giving them a platform.

“I decided to completely stay away from it in the (men’s) Six Nations as I didn’t need the negative energy.

“It’s important not to let it dominate you. Now I enjoy blocking people and I have also seen the positive side of social media in the way I can share my story and engage with people.

“I’m really passionate about making sure the negative side doesn’t control the narrative. How on earth is that going to inspire any young people?”

Blazing a trail for the next generation is a prominent theme within Finding Her Voice.

“Sport is so often dominated by men that becoming a commentator or coach might not even enter a young girl’s thought process,” said Waterman, who is a former world rugby champion and Global Rugby Ambassador for HSBC, helping to create opportunities for young girls to report on and experience commentating at future HSBC World Sevens Series events when they return later this year.

“I hate the thought of anyone not seeing people they can relate to in these roles and the more they see these different options because someone that looks like them is doing it, the better.”

Waterman won seven Six Nations titles across a 15-year international career and victory for the Red Roses on Saturday would secure a third straight crown for the current crop, who overcame Italy and Scotland in the pool stage.

Waterman feels the Red Roses will have to raise their game against a similarly in-form French outfit as the hosts continue to adjust to life without talismanic fly-half Katy Daly-McLean.

“Katy marshalled that team for over a decade, she was captain when we won the World Cup in 2014 – her stepping away is huge,” she said.

“That isn’t to say Helena Rowland and the other 10s aren’t magnificent players but they have a few years to go before they can rival Katy’s experience.

“The England girls have said how tough and physical the games have been, even if the scores may not reflect that, and the best players raise their game when they get challenged. I’m really intrigued to see how England perform this weekend.”