Waterman hungry as ever for England success

Fresh from England's end of year Autumn International Series, we caught up with experienced England fullback Danielle Waterman ahead of a pivotal year for the game. 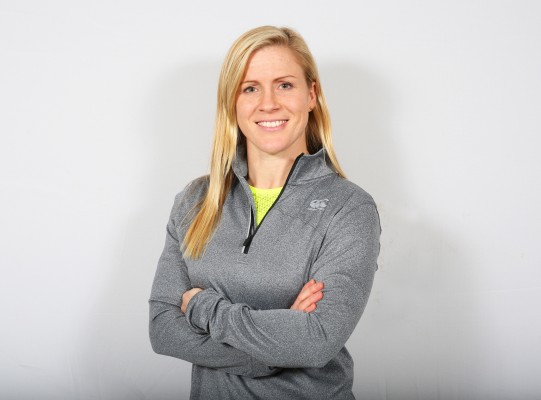 Waterman played an instrumental role in England's series, with her stunning try at Twickenham against Canada an undoubted highlight from the four games.

She gives her views on a range of topics from bonus points being introduced in the women's 6 Nations, to Ireland's hosting of the 2016 World Cup.

Bonus points for the 6 Nations

"As a player you just want to win every game and obviously it matters where you come within the table but fundamentally you just focus on winning. It will be interesting to see what it might do in terms of mixing the table up but the top three within the 6 Nations are always very close so it might change that up a bit. Our focus will just be to win every game and the points are irrelevant."

Overall assessment of the Autumn internationals

"To end how we did was pleasing. There is still a massive amount of improvement but as a team, the camaraderie, the strength of our units and the reflection on how we performed together will stand us in good stead come the 6 Nations. With more contracts starting in January, the girls are excited about the opportunity to come together as one. I believe the positives from the series came from the strength of our defence and some of the more clinical skill that we showed and how that progressed from the first game to the last."

"The overall series of games was good for women’s rugby. Ireland showed against us that they continue to grow, France had a good series and though the Canadians came unstuck against us they had some really good performances."

"It is always frustrating to lose but at the same time I was very positive after the game. We made errors that lost us the game but they are ones we can change. They are technical detail and we have signs of individuals coming back into a new coaching set up. I relish playing in those really difficult games because they mean so much more when you win them. It is a really positive thing to have games against teams like New Zealand. "

"It is really challenging. The pictures that you see are so different and having played for years I rely on things that I have learned for donkey’s years and all of a sudden you don’t see that for two years. You come back into it and you are having to make decisions very quickly in a tighter space, with more bodies to avoid.

"The interpretation around the breakdowns is very different and the collisions are obviously much bigger in 15s and because of the bodies that are coming into the contact, the 7s players had to work a lot with our coaches around all of that. When it comes to jackalling for example the interpretations are very different as is how the ball presentation is refereed.

"The speed they want the game in 7s means you get punished very quickly if you are holding on or killing the ball, so getting used to that has taken a bit of time again.

"I gave away a penalty in the Ireland game which the coaches said after that in 7s I might have won the penalty, but I needed to show that I really was over the ball and was able to win it. That seems small but it is massive – it was the last play of the game and Ireland nearly scored! Our coaches have recognised the transition and worked with us on it."

The Olympics experience earlier this year

"I think the fact that we did go professional was fundamental – we had to do it.  We started to build but we didn’t reach enough finals I think to turn the tables when we got to Rio, but I don’t think that was through any fault of opportunity – I think it was various other avenues such as underperforming under pressure and that comes from perhaps not experiencing it earlier on. It was clearly really disappointing, but what that has done for women’s rugby within Great Britain is huge and across the world too.

"It is fundamental. No team is perfect, you are constantly striving for perfection.

"We have a totally different dynamic to 2014. It’s a totally new coaching team and management and that has an effect and players go through different phases within their careers. For me, I would have different expectations of myself and what I can offer the team as well as having some of the younger players through with different things they can bring."

"Ireland is where I made my England debut so I have really fond memories of playing there.

"It was the last game of the Six Nations and we won the Grand Slam so I definitely remember the party! It was an amazing experience to play over there and I love going over to Ireland.

"The support is brilliant, the Irish girls always step up when they play on home soil and I really think that Ireland will do a great job of hosting the World Cup. It's been brilliant to see how Irish rugby has developed their women’s game and supported it. I know a lot of the girls and they deserve that recognition they are getting now."