We've looked back at what happened in 2016, but what would we like to see in 2017? We've borrowed the magic lamp from the local pantomime, given it a good rub, and made our wishes. 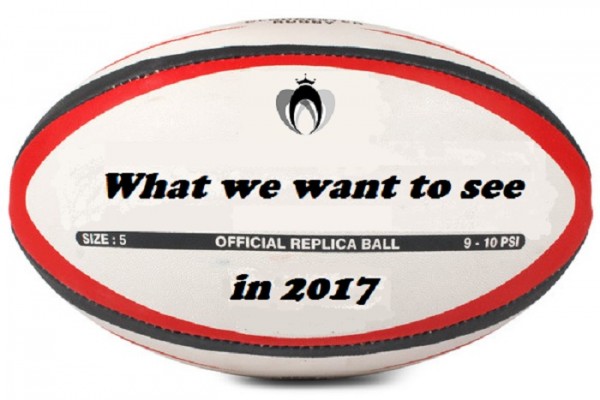 When the existing five-year sponsorship deal between the Six Nations Committee and RBS was negotiated back in 2011 women’s rugby was in a very different place to where it is today. In England, the RFU had only just taken on responsibility for the women’s game, there was no Women’s Sevens World Series, no Olympic Games, and most women’s six nations games received no coverage even on live stream never mind TV.

Perhaps it is therefore no surprise that the women’s tournament was not included in that sponsorship deal – though you might be forgiven for not realising that when look at the official website, twitter feed or even third-party press releases from bodies including World Rugby. As women’s rugby has exploded in the past few years, RBS have done very well from a link that they have not contributed a penny for.

But that deal ends after the 2017 tournament. A new sponsor is being sought and a new deal will be negotiated. Women’s rugby has moved on massively since 2011, is expanding far faster than the men’s game and by some (possibly exaggerated) estimates could be a quarter of the game by 2023, when the deal will end. This time surely the women’s tournament MUST be included. And the model is already there with both HSBC’s sponsorship of the World Sevens Series and Old Mutual Wealth’s deal with England for the Autumn Internationals.

Ten years ago, something truly remarkable happened – something that has been called the biggest injustice in rugby history, and which would hopefully be impossible today. Spain, who had been members of the Women’s Five - and later Six – Nations since 2000, and had finished as high as third just two years before, were dropped from the Six Nations in favour of Italy – a team Spain had beaten in every competitive fixture to that time.

The reason for the change was nothing to do with their on-field performance, or indeed anything within the gift of the women's team or the Spanish union. The reason was that the Six Nations Committee took over responsibility for the women’s tournament from 2007 and, because Italy were in the men’s tournament, it was decreed that they had to be in the women’s as well.

So, in essence, Spain's women's team was expelled from the Women's Six Nations because their men's team was not strong enough for the men's tournament.

Let's pause for a moment and try to envisage a circumstance where the reverse could ever conceivably happen. Hard, isn't it? Words like "unfair" barely begin to scratch the surface.

Ten years later – remarkably – Spain have maintained their standards, winning eight out of fifteen tests against Six Nations opposition and qualifying for two World Cups, ahead of Scotland and Italy for 2014, and Scotland again for the next competition, while also producing a sevens team that was the leading European team at the last Sevens World Cup, and behind only England and France in the last World Series.

Surely the time has come to bring Spain back in from the cold? After all there is space within the existing seven-week Six Nations calendar, it would give all teams a more balanced three home and three away games each year, it would make the tournament more competitive, it would show that some of the richest unions in the world really do care about the broader world game, and it would mean that the tournament really did include all of Europe’s top teams. As for the cost of just one extra game per team? See previous comments on sponsorship.

Over 100 countries have national women's sevens teams. It is the result of a remarkable explosion in the worldwide game - no sport, except association football, is played internationally by more countries.

But around half of all international games are played by only 20 teams - and those teams are rapidly leaving everyone else behind. In Europe the gap between the Grand Prix - the Top 12 - and the next level used to be the break point, now it's the five World Series teams that are almost untouchable by the rest, while it is now almost unheard of for Oceanian, North or South American World Series teams to even concede a point against local opposition.

As teams like the Netherlands showed, even with substantial resources behind them, bridging that gap is tough as outside the World Series there is almost nothing that offers regular challenging international competition - so outside the WSWS teams slip further and further behind.

World Rugby say they have ambitions to form a "Challenger Series", and potential venues such as Las Vegas, Dubai, Hong Kong and Amsterdam already have popular tournaments that could be "upgraded" to a "challenger" status. But we need to bring these plans forward as the dozen World Series teams are already risking becoming an uncatchable elite, and the World Cup and Olympics a near closed shop.

As a World Cup year 2017 should be a year when test rugby takes priority over fifteens. With Germany and Sweden returning to test rugby, plus half-a-dozen other European test-playing unions missing out going to on Ireland, 2017 should be an ideal chance to return to full week-long European test tournaments, of the sort played annually before 2012. For Six Nations unions, the annual European test tournaments were a way of developing he next generation of test players by entering 'A' teams - Italy in particular used the tournaments to develop the strong and competitive teams we now see. For the rest of Europe it allowed them to pit themselves against both each other and the rising stars of England, France and others.

If World Rugby are as committed to women's fifteens as they have said, the revival of regional test tournaments worldwide should be a priority. So we also hope to see a full Asian test series with Kazakhstan back, and an Oceania tournament too - this year's Fiji v Papua New Guinea cannot allowed to be a one-off. And lets also revive the Elgon Cup by giving the winner a game against South Africa, as well as giving encouragement to fifteens in South America after the recent domestic championship in Brazil.

Fifteens is the form of the game most players want to play because it gives rugby a unique selling point that sevens does not offer - a sport for everyone.

An end to geoblocking

We simply refuse to believe that any TV company is paying World Rugby any significant extra sum for exclusive rights to either the World Series, the Women's Six Nations, or the Women's Rugby World Cup. We also refuse to believe that any TV company with any commitment to the game would cancel planned coverage just because matches were available on live stream. Indeed we know from TV sports experts speaking at World Rugby-sponsored events that live stream builds audience for TV by creating a buzz that makes more people tune in.

So why on earth is any women's international rugby ever geoblocked? And if, by oversight, geoblocking is in the contract - change the contract! This is the shop window for women's rugby - open the curtains to all!

In the past, when background information about women's rugby was hard to find, inaccurate statements from senior officials about the game were unfortunate but, perhaps, forgivable. Today that really is not the case and we are hoping that in 2017 we will not have to correct statements like those we have had in recent months claiming (incorrectly) that "this is the first [Pacific] women's test championship", or that "this is the first time that two Asian teams have qualified for the World Cup" or that the sponsor of the men's Six Nations has any link to the women's tournament (see above). Is it too much to hope for that people will check the accuracy of their statements in future?

There are women's European club tournaments in just about every sport you can name - except rugby. It may sound ambitious, and no doubt many will shout out "cost" and "crowded season" but there has already been such a tournament - indeed there have been two. Rugby Europe - then FIRA - launched "La Coupe d'Europe de rugby à XV féminin" in 2007. Unfortunately it was all perhaps a little early, only France and Spain entered, and after two seasons (both won by Montpellier) the competition ended.

But its now 2017. Women's rugby is on an unparalleled high, so is it not time to revisit the idea? And if the varying strengths of club teams may be seen as a barrier, there must at least be considerable mileage in games between the English and French champions (not to mention sponsorship and TV interest, in France anyway) - perhaps as a season opener. And then expand from there.

One thing we can hope for with confidence in 2017 is that the World Cup in Ireland will be the best ever. On paper it looks like the strongest field we have seen, with even the "outsiders" being regular test-playing countries, and great venues in Dublin and Belfast which will hopefully be packed on all five days. We also hope that the IRFU do not underestimate interest in the tournament (as the RFU and FFR did in 2010 and 2014, when people were turned away for the preliminary stages due to the grounds being full) and that this could even be the first women's world cup to officially make a surplus.

And above all - for the first time - a World Cup that everyone can watch with every game will be made available free-to-air on TV or live stream, and above all with no geoblocking!