Wilson moving on with no regrets

We caught up with England wing Kay Wilson who this week announced her retirement from international rugby. (Pictured, Wilson playing for Old Caterhamians, where she started her career aged 5, and then in familar England kit) 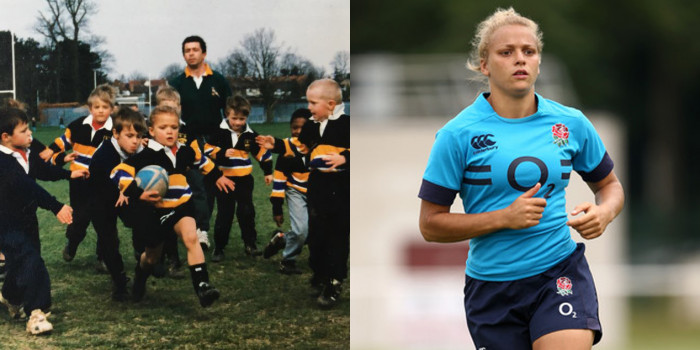 One cap shy of a half century and surely years ahead of her as a test player hardly made Kay Wilson the most likely candidate to announce her England retirement this week.

The 26 year old has had a stellar 2017. Seven tries against Scotland in the 6 Nations caught the headlines in a competition where she ended up top try scorer, scoring just two less than former England full back Chris Diver’s competition record of 10, set 14 years ago.

Wilson went on to be an ever-present at the World Cup, starting the final, and seemingly with years and years ahead of her in the white shirt either at 7s or 15s.  She has excelled at both, but a burning desire to see the world, live and work overseas combined with her genuine satisfaction with her England career, means she has played her last test match.

Wilson will head to Sydney this December with her sister with the hope of living and working there for the next few years.

"From when I was very young I have wanted at some point in my life to travel and live abroad and I just thought if I don't do it now I never will," she explains.

"I never imagined I would win one cap but I've won 49, won a World Cup and travelled all over the world. I think I can be very happy with that and it just felt like time for me."

"There's nothing wrong with having a good balance to your life, and rugby has given me an awful lot and now it's time to do something else."

If there are clubs in Sydney who might relish the chance to sign one of the word's best finishers, they might be disappointed. Wilson has no plans at the moment to play on.

"It's not in my plans at the moment though I might play some touch. I know how much commitment goes into playing club rugby, it's not just like you can turn up and play so I am taking a step back from that."

Having started playing at just 5 years old at Old Caterhamians, Wilson is perhaps the prototype of the new breed of international women's players. Having risen through the ranks as a youngster, she finished university and began a sevens professional contract straight after.

Now her test rugby career is finished, she can already say with hindsight that the opportunity to play as a pro was special.

"It wasn't much of an upheaval for me as I came straight out of university into a contract. I was training a lot anyway at UWIC so moving into a more professional environment wasn't such a huge jump. But I don't think I quite realised how much both that it would take out of me and how lucky I was. Most of the other girls left their career to come and take a contract but I am doing it the other way around - now I need to start my career."

Wilson says she wasn't tempted to play one more match to get to her 50th cap.

"I genuinely wasn't. Like I said, getting one cap was a dream and to get to 49, I think I can be very happy with that. It's not as easy as saying oh just play one more game and get to 50. Getting selected for England is incredibly tough. It comes with a lot of hard, unseen work. I told the coaches that last season would be my last and I think I am ready to move on now."

Having gone into last season knowing she wouldn't have another, Wilson says the achievements along the way meant even more.

"It was obviously devastating to lose, but I think it's right to be proud of the achievement of reaching a World Cup final. On the day we were beaten by a better New Zealand team but we have helped to put rugby on the map and even though we didn't win we should be really proud of that."

"I think it was striking that so many people knew about the tournament and were talking about it. That felt like a big shift and I hope the game can really capitalise on that now.

Having been part of the team who did win the World Cup in 2014, does she feel England did capitalise on that?

"I guess we did, though it was difficult because you had players like Emily Scaratt, who was such a key player in that World Cup, then going to play sevens so I think the momentum was a challenge. Sevens has a different audience and so on."

She says nations are still working out the best way to make success at 7s and 15s sustainable.

"I know people talk about it being hard to go between the two for players but I didn't find that. I enjoy playing both and I've never had to swap between them at the same time, it's been one or the other. As players you block out the debate going on around it and just focus on training and playing. I think in a a year from now, I might be able to give a more considered opinion of the game and how it's going to work with the two formats but as I've just stepped out of playing, where that's all your focused on, that's difficult.

As to the high points of her career - there is only one winner.

"The World Cup win in 2014 definitely but I don't think I realised just how special it was until much later.I was 21, it was my first World Cup and it was a brilliant experience but it's only now I can see what an amazing thing it was to do.  When I look back I know I will have friends for life from playing for England, and we'll all have that experience to keep with us forever

"The challenge now is using the momentum of the last World Cup to continue to push exposure and encourage media coverage - it makes a huge difference as we saw in Ireland. Pretty much everyone here interested in rugby knew about it or watched it. England are now starting their cycle again and while there'll be a different England team at the next World Cup, we need to keep that going."

And is she concerned about regretting hanging her boots up so early?

"I will miss it of course, I will be around for the Autumn Internationals and I'm sure I will be thinking I'd like to be out there but I also know just how much hard work goes into that and how challenging it is - playing for your country is brilliant but it's also very tough and hugely emotionally draining.

"The matches are the fun part, what people don't see is all the training, the huge amount of effort it takes to get to matchday."

Wilson cites selection as the toughest part of being an England player. At the World Cup in Ireland, the England management used Whatsapp for team selections, making sure those who weren't included were talked to first, but typically players find out over email.

"I definitely found selection the toughest part. It is a roller coaster. You're sitting there with your laptop waiting to see if you're in the team or the bench and when your name isn't there it's heartbreaking and when it is you're elated. There's a lot of emotion to deal with because if you're in and your close friend isn't or whatever you start feeling for them too. It's all part of it. That's probably the one part I won't miss."