Yesterday we introduced the story of the Wiverns tour of Britain and France. After three big wins against regional select XVs, the Wivens arrive in Shenley for the annual festival. 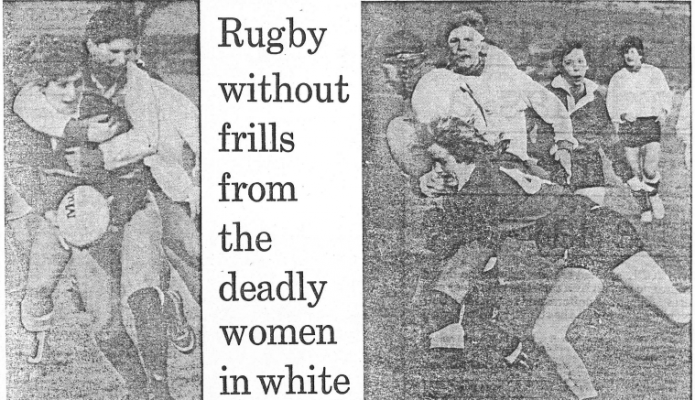 Next up (just two days after playing the South of England) was possibly the highlight of the tour, with the Wiverns taking part in the one-day tournment in Shenley organised by the Women's RFU. Games were 10 minutes each way, with the Wiverns dividing their squad between two teams – who, needless, to say both went through the tournament unbeaten.

“The tournament play was a little disappointing because the organizers limited the length of the matches – barely time to find any pace. We scored a lot in those few minutes but in the end forfeited the tournament because we refused to play each other in the semi finals. I regret we did that – it would have been a great match with a big audience. “I recall having a nice time with the team from Cardiff…there were a number of teams in the tournament and while they were serious about playing they were not all that skilled and their fitness was awful; a lot of cigarettes passed around at the half. We were very good, very fit and rolled over everyone.”

Some of the results were indeed one-sided. WIverns I opened with a 42-0 win over University of Warwick (Suzi Arnsdorff touching down five times), followed by a 12-0 win over Old Windsorians, 30-0 over Caerleon (Arnsdorff three more tries) and then 30-0 against Swansea. Wiverns II saw off UCW Aberystwyth 50-0 (Carolyn  Alley four tries, Karen Keith three), a bye against Charing Cross, then Cardiff 26-0 (Candi Orsini two tries) and ending with 32-0 against Wasps (Candi Orsini adding three more scores).

“I do recall the men on the sidelines,” continues Kerri. “They were for the most part complimentary but did not consider women serious players. One guy told me at the social that he was mad the UK women had lost so soundly and that when the US returned to play in the UK in subsequent years it would be a different outcome. So I think we all felt great about that sentiment – I always believed that the Wivern tour helped women’s rugby in England.” Emma Mitchell, who was also at Shenley, agrees:

“I think the Wivern tour and the experience of playing or watching them, showed women playing in the UK what was possible and they gave us a women’s standard of play to aspire to. I know that I came away knowing that I needed to work much harder on my rugby skills and, in order to have any chance of being able to compete in the future, I’d also need to get stronger and more powerful – time in the gym as well as on the training pitch.”

While Britain’s finest players may have been left licking their wounds and learning from the experience, the Wiverns were not finished. They now crossed the channel to France and five days later met Chilly Mazarin in Paris. They were one of the leading teams in France, but the result was much the same as in England – eight tries and 38-0. A “third half” –a game of two 10-minutes halves - for the other half of the squad, was also arranged, and this time the Americans won 21-0

The tour was not all about rugby, however, and Kathy Flores recalls fondly Thanksgiving in Paris:

“My best memory though is not on the field...it was Thanksgiving when we were all away from home and family and staying in hotels.  We had a meeting in the morning about having a dinner together and everyone went out and bought some type of food… and of course wine as we were in France, and went to one player's room, laid out blankets and had a meal together. I don't know why that has stayed with me all these years except it seemed so thankful for being there together and sharing this experience with other players whom I didn't even know before the trip

The final game came the day after the game with Chilly Mazarin, with a 20-minute-aside game against Soisy, which Kerri Heffernan remembers was a bit different to her experience in England:

“I was in the forwards and recall that the front row was getting the hell beat out of them – punched and kicked. I was at six and the opposite prop just kept punching me in the head – they were for real. We won handily – we still had superior skill, fitness and speed – our backs were tremendous and once out the ball was usually on its way to the line.”

“For real” the French pack may have been, but they could not prevent the biggest win of the tour, ten tries and 56-0 (McVann, Keith and Rutkowski two tries each). The rest of the squad then played one final 20 minutes… and another win, this time 24-0.

And so the tour ended. A whirlwind had run though England, and touched France too, and the game on this side of the Atlantic was changed, forever. Emma Mitchell and her contemporaries had seen the future, and what their game could become.

As for the Americans Kathy Flores is in no doubt about the tour’s importance for the visitors as well: “I think the tour was the beginning of the WNT [US national women’s team]...or the idea there should be a WNT!  It was the kick-off that lead to the first international in '87 against Canada.  We were certainly ahead of other countries in the beginning because women played regardless of whether we were getting support or not - other countries where rugby was a "man's sport" women waited for male support which has finally come around but was in short supply in the 70s-90s.  We won the World Cup in '91 because we had been playing longer than European teams at the time and were fitter - they obviously may have understood the strategy of the game a bit better than we did having grown up with it but our fitness and mobility between our fast backs and forwards outlasted them.”

And her final thoughts on the events  thirty years ago:

“The tour was great for getting to know players you may have only heard about or played against and here was the opportunity to play with them and also to see what an American team could do abroad against players who grew up with the sport.  I don't think I was surprised by how well we all got along on and off the field...I expected us to do well and we did.“

The tour in numbers

"The tour was also the beginning of the US National team - or the idea there should be one! It was the kick-off that lead to the first international in '87 against Canada"