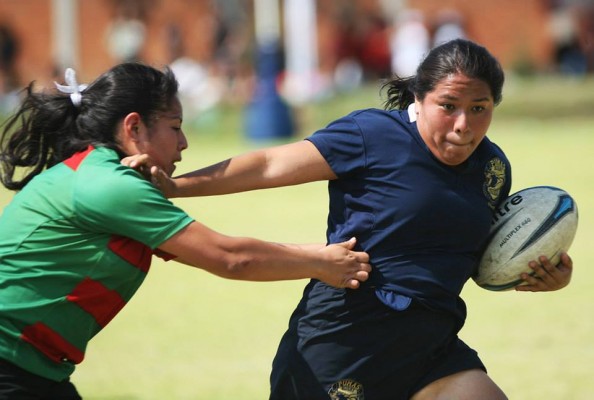 To understand Mexico you need to understand the geography and its location. Although Spanish speaking and culturally similar to many countries in South America, Mexico, the largest country in Central America, is politically and geographically linked to North America - and also acts as a gateway connecting North and South.

Mexico, eight times larger than the UK and 3.1 times the size of France, has in recent years seen a rapid expansion of women’s sevens rugby. Alongside Peru it is one of the world's fastest growing rugby countries - in 2009 there were only women's five clubs across the country, today there are 31!

A important political change occoured in 2008 when they joined NACRA - the regional body for rugby in North America, which previously prior to Mexican involvement was known as NAWIRA - a name ("North America and West Indies Rugby Association") that reflected the anglo-centric nature of the body and its members to that point. However, at the end of 2009 a new name (now "North America and Caribbean Rugby Association") and constitution allowed and encouraged new members to join. It is now one of the IRB’s six regional bodies and organises rugby regional tournaments, including those at the Central American and the Pan-American games.

The reintegration to the Olympics was one factor that has triggered this sudden increase in interest in the game in Mexico and the wider region. However, in the case of Mexico and Central America it was also the Pan-American games of 2011 - the equivalent of the Commonwealth games - which was hosted that year in Mexico and gave the game exposure on local TV. As a result interest not just in men’s but also in women’s rugby grew and the subsequent reintegration to the Olympic program gave it an additional boost.

In Mexico of March this year (2014) there was the first National Club Championships, won by Templarias of Mexico Cityand at the time of writing the National State Championships are about to take place. The best eight states will fight it out to discover the new National Champion, with selection is based on local club players - similar to the county system in the UK and provincial systems elsewhere.

The growth has also resulted in success for the Mexican national sevens team, which is now probably the third-best side in NACRA, overtaking Trinidad, giving them an outside chance of reaching the Olympics (they almost certain to play in the repecharge tournament). The biggest problem, however, for women’s teams and clubs - like any other country - is the lack of numbers and financial restrictions. However Mexican Rugby Federation now claim that current player numbers are:

It is now well accepted that sevens is the established route to move forward - but there has to be a plan or a strategy to establish XV in Mexico, though the lack of support by the IRB or the main women's rugby bodies is frustrating this ambition which does not promise well for the long run. NACRA have USA and Canada clubs playing primarily XVs while in Mexico and the rest of the Caribbean sevens is the major game - a division that does not assist growth.

Having spoken to local female players there is a desire to play XVs but it needs introduced gradually. At present it appears as if there are two sports - both need more integration.

Looking at its neighbours, Central America has seven countries in all, although the population of this countries is generally much smaller than Mexico with Guatemala having the highest at 14 Million.

Central American Countries are generally part of CONSUR - the South American IRB Regional Governing body. Guatemala, El Salvador and Costa Rica are official Members of CONSUR, while the rest are either associate or have recently applied to join.

The two strongest federations are Guatemala and Costa Rica who was recently made associate Member of the IRB and have five women’s Teams. Guatemala with 3 established teams and 1 new one has become a force and has defeated Costa Rica and won several tournaments.

The other Rugby Federations in the regions are Belize, Honduras, EL Salvador, Nicaragua and Panama. Most are at different stages of development the newest being Nicaragua which just started in 2013. Belize is also still at an early stage and is neither a member of CONSUR or NACRA.

El Salvador has three Rugby clubs and about 80 female rugby players with lots of committed players and a strong program which includes a women’s only team. A new team is currently being formed making it a possible 4 teams for 2014.

Panama women’s program started in May 2012 in Panama City with two clubs and one club in Chitre Southern Panama. Potentially three new clubs are forming 1in Chiriquí on the Border with Costa Rica the location of the two new clubs is still unknown

Because some of these countries geographically are small; El Salvador and Guatemala have combined their club Rugby to have a meaningful competition so day trips and crossing the border are the norm or the odd friendly against Nicaragua - the newest rugby country.

Financially speaking these countries are poor and funding is not as good in relative terms compared to Mexico but the fact that is an Olympic Sport it has helped considerably as it gets access to funding and considered to be more important than a non-Olympic sport as mentioned in my first article.

In November 2014 the Central American and Caribbean games will take place in Veracruz, Mexico and Rugby Sevens will be there again.

Number of Registered Players by Country

NEXT WEEK: CONSUR and Conclusion to Current series