"Women’s RWC is the game’s flagship"

With the 2017 World Cup Final only three days away, we took the opportunity to speak to Katie Sadleir, the new General Manager (Women’s Rugby) at World Rugby about the future of the women's game, and especially women's test rugby. 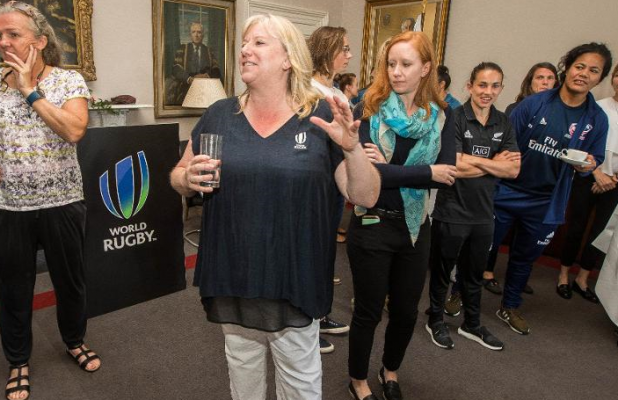 Katie Sadleir at the World Cup "Captain's Breakfast" before the start of the tournament.

SQ: Can you explain your role?

KS: As part of World Rugby’s strategy to increase the sustainability and competitiveness of women’s rugby globally, the position of women’s project manager – as it was – was expanded to fit with that uplift in profile and significance.

Essentially, the job is to develop and oversee the implementation of a new plan aimed at accelerating the global development of women in rugby with the support and direction of the Women’s Advisory Committee. At a high level, this means my role is to work with the various departments within World Ruby to ensure the growth of the women’s game and improvement of the standards at the performance level. This also includes the need to increase participation around the world and drive an appropriate policy of gender inclusion at all levels and sectors of the game (playing, coaching, match officials, judicial and administration).

The scope of my role covers leadership and governance, strategy and planning, input into investment and providing advice and support to our member unions and regional associations enhancing the women’s game. I am very positive about the state of women’s rugby currently. Participation levels are at an all-time high. There are now more than 2.2 million women and girls playing rugby at all levels, accounting for more than a quarter of players globally – an increase of 142 per cent since 2012.

SQ: How accurate are those figures? What do they include?

KS: Non registered players would be included. Player numbers always come with a health warning. They are useful but have limitations in what they can tell you and they always need further context. They are part of the overall picture.

SQ: Why have these player numbers been increasing so quickly?

KS: In 2016, 39 per cent of the 1.99 million Get Into Rugby (GIR) participants were girls (773,000) – that number rose to 46 per cent in the Rugby Americas North region, which had the highest percentage of female participation across all six regions, while in nine countries, the number of girls participating outnumbered boys. World Rugby’s goal for GIR is to reach 50 per cent girls participation globally by 2025.

SQ: How do you ensure that “participants” become “players”?

KS: Get Into Rugby is a three-stage process – try, play, and stay. As unions move from the try and play stages, the key element is how to get these new players to stay participating in the game. That is something we stress with the unions as we continue to support them. Far from being the neglected stage of the process, it needs to be the focus.

SQ: What have been the highlights of your first year?

KS: The highlights of my role so far have been meeting some inspirational influencers around the world who share a great passion for the women’s game and its potential. I’ve been fortunate to meet with representatives from Tonga to Mongolia and from San Diego to Dublin to learn more about the cultural differences and aspirations of regions for the women’s game. Most recently, another highlight was hosting a breakfast last Friday for the captains and vice-captains of the teams competing in this World Cup to talk about leadership and what support we hope to provide them in their roles.

SQ: Where does the World Cup fit into the plan?

KS: World Rugby’s vision is ‘a sport for all, true to its values’ and our mission is ‘growing the global rugby family’ and the ongoing Women’s Rugby World Cup is pivotal to us delivering on that mission. The success of the Women’s Rugby World Cup underpins the growth of the women’s game. The 2014 tournament in France raised the bar, opening women’s rugby to an unprecedented global audience and showcasing the advances that have been made in the sport and the 2017 edition is taking the tournament to a whole new level in terms of competitively, playing standards and engagement with the public, whether in terms of in-stadia spectators or TV/new media audiences.

SQ: There have been many concerns expressed that, despite its popularity with players and spectators, women’s fifteens is under threat by the emphesis on sevens.

KS: Certainly, sevens has played an important role in the growth and development of the women’s game in recent years – the outstanding success of the women’s sevens competition at Rio 2016, following rugby’s return to the Olympic programme, delivered a huge boost globally in terms of participation, profile and engagement, prompting considerable interest from growth markets such as Brazil, China, Netherlands, USA and Canada. And, of course, the hugely successful HSBC Women’s Sevens Series, which has grown rapidly since its inaugural 2012-13 season, continues to take the sport to new locations, winning new fans and inspiring players worldwide with its mix of impressive skill, entertaining and competitive rugby and exciting atmosphere. But as you point out, 15s is still very popular and remains the pinnacle format of the game, with Women’s RWC the game’s flagship tournament.

To enable that coexistence and allow both formats to grow and inspire new audiences, the game is undergoing a transformation at the highest levels with World Rugby’s landmark Global Women’s Plan set to accelerate development of women’s rugby on and off the field of play. The new draft Global Women’s Plan sets out a clear vision for growth in 15s and sevens and a commitment to further the profile, development, sustainability and success of the sport while strengthening World Rugby’s position as a global leader in the promotion of equal opportunities in sport.

SQ: How will you encourage more women’s test rugby?

KS: The draft new plan talks about ensuring a coherent international calendar of events for both 15s and sevens. We are committed to growing participation in both formats of the game and will work with our unions to make this happen. We are consulting on the draft plan at the moment. It will go to the Women’s Advisory Committee and Rugby Committee in September with the view to it going on for consideration at ExCo and World Rugby Council in November. We sent the plan to all unions and regions and, encouragingly, we had written feedback back from 99 unions and all six regional associations with a strong endorsement of the overall direction proposed. A key workstream talks about the high performance and competitions.

SQ: What is the future of the World Cup? When will we know about the venue of the 2021 tournament?

KS: As regards future editions of the Women’s Rugby World Cup, as always happens, a full review of 2017 will take place where World Rugby will seek the views of players, coaches, supporters and unions as to what they feel were the strengths of the tournament and how it could be improved in the future. Possibly more than any other tournament we run, the profile of Women’s Rugby World Cup is changing fast. It is becoming more and more popular and high-profile and it will adapt as appropriate to reflect that. Once the full review is complete in the coming months, the bidding process for 2021 will commence.

"15s is still very popular and remains the pinnacle format of the game, with Women’s RWC the game’s flagship tournament."