Three years ago ScrumQueens revealed the remarkable story of Emily Valentine, the Ulster schoolgirl who played for rugby for Portora Royal School in 1887 – the earliest record of any female playing rugby. As was said at the time, Emily was probably not alone, and now evidence has come to light that women may have played the game up to six years earlier. 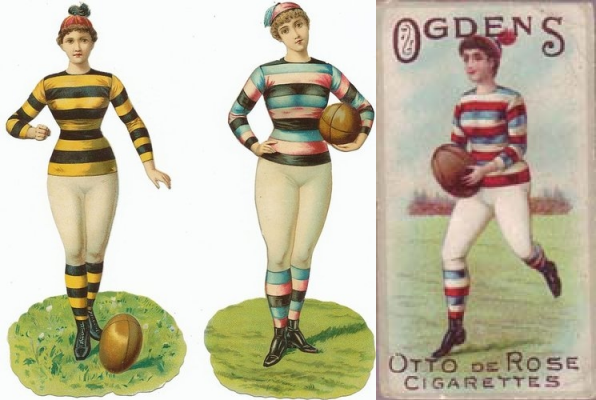 The discovery – in a series of local newspaper stories from the time – is not as clear and unequivocal as evidence of Emily’s achievements but is all the more fascinating for what it reveals about the development of the competing football codes, and the attitudes of the Victorian media and population to the idea of women playing such sports.

What was meant by “football” in the 1870s and 1880s is not always clear. The new code of Association Football was less than 20 years old, and had only recently begun to significantly diverge from rugby. As a result clubs and teams would frequently switch between codes and events advertised as “football matches” (especially when not part of an official tournament) could be played to either code – or variations agreed on the day.

In early summer of 1881 a group of women from Scotland began a tour, playing “football” in various towns in Scotland and northern England. The women played as “Scotland” and “England” – though how many were truly English or Scots it is impossible to say (there is some evidence that they switched teams between games to even things out). It was a commercial – almost fairground – affair, and ticket prices were high – between one and two shillings each (based on earnings that could be like charging £20 or more today). Despite this large crowds attended several of the early games, but reports appearing in local newspapers were rarely flattering – and the attitude of the crowds was less than supportive, with several games being abandoned due to rioting both inside and outside the grounds.

From what the reports say about activities on the field it is clear that the early games were played (more or less) to Association rules, but on 25th June (after fleeing another riot in Manchester four days before, where the gatekeeper also made off with the proceeds) the women arrived in Liverpool – and something changes.  A report in the Liverpool Mercury for 27th June – after detailing the kit being worn – describes how Scotland “succeeded in making several touchdowns and one goal” in the first half, before they “forced the English on their goal and had several touchdowns” in the second half. In the end Scotland won by two goals to one – a scoreline that is perfectly in keeping with a game of rugby as played in 1881, points for tries and conversions not being introduced until over five years later.

So… were they actually playing rugby? If they were then names appearing in other reports would suggest it would only have been 11- or 12-a-side, and other parts of the report do not quite fit. For example, England’s goal did not come following a touchdown but came after “a spirited dash” when they “managed to get the ball through and make a goal”. However rugby rules at the time allowed for “field goals”, and – while there is no mention anywhere about the ball being carried – there is also no mention about it being kicked either.

In truth we will obviously never know exactly what was happening that afternoon at the Cattle Market Inn Athletic Grounds, in Stanley, Liverpool – but one other intriguing piece of evidence has also come to light. This is a cigarette card showing a woman running with a rugby(?) ball in her hands, wearing kit very similar to that described in some of the reports of the 1881 tour. The card was issued a little later, in 1895, but the company that published it was Ogdens – of Liverpool. Perhaps this tour was not an isolated event in the north of England?

So, while Emily Valentine remains the “first name” of women’s rugby, she is possibly just the tip of a hidden mountain of women’s interest – and even participation – in all codes of football at the end of the 19th century. Maybe, somewhere, there is yet more to discover!

Many thanks to Patrick Brennan, compiler of Association Football history website Donmouth, who first discovered these reports – which can be read in detail athttp://www.donmouth.co.uk/womens_football/1881.html.

Also thanks rugby collector Frederic Humbert, who unearthed the 1895 cigarette card – and similar fascinating memorabilia – which can be seen at http://rugby-pioneers.blogs.com/rugby/2012/03/women-were-playing-rugby-during-victorian-era.html.