"The axe has finally fallen on this shameful women's sport!" 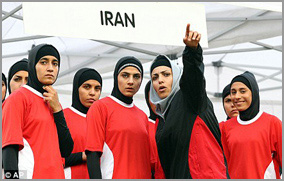 This was a headline reported to have appeared in a Tehran newspaper at the end of last week, reporting the apparent end of Iranian womens rugby.

The story of womens rugby in Iran had been truly inspiring sporting tales in recent years. The game received particular attention following the appearance of Faramarz Beheshtis remarkable film Salam Rugby in 2010. The documentary, which has been shown around the world (apart from Iran), details the struggles and unique challenges faced by coaches and players who just want to play the game they love.

Despite all of these obstacles, womens rugby grew and developed in Iran to the extent that in 2009 they made their international 7s debut. The team immediately captured headlines, not only because the idea of a womens rugby team challenges every stereotype the west had about Muslim women, but also because of what they wore.

The IRB premitted them to wear full body covering that met the religious rules demanded by the rulers of their country. It was that kit attracted all the comment and coverage - much to the annoyance of the Iranian women who just wanted to be treated as rugby players.

Because as much as anything, they proved to be pretty good players. Despite everything, from 2009 to 2011 they have won a third of all the internationals they have played. Last October they finished 9th out of 12 in the Asian championships.

But that now seems to be the last we will see of them, for now anyway. Even as they achieved success overseas the pressure had been building at home. Their first male - coach first barred from going within 10 metres of his team, then threatened with prosecution for prostitution, and finally banned from working with the team. More recently they have been forced practice almost entirely indoors, only allowed outdoors when no men could see them, and then at the end of last year rugby was removed from recognition by the main national sports body.

Then, at the beginning of this week, Canadian newspaper the Globe and Mail in an interview with Faramarz Beheshti revealed that reportedly at the end of December womens rugby along with all womens sports involving any form of contact (even skiing, which is very popular in Iran) were banned. All three Iranian womens rugby websites and blogs have now disappeared, and reports reaching us from Iran have confirmed everything the Globe and Mail story including the above headline.

It is a tragic development if it is true and the motivations behind it are difficult to understand, not least because it contradicts statements made by the Iranian president after his election when he promised to ease restrictions on womens sport. At present we also have no news at all about what has happened to the hundreds of players and coaches who have taken up the game in recent years,

For more on the clampdown on Iranian womens sports see here