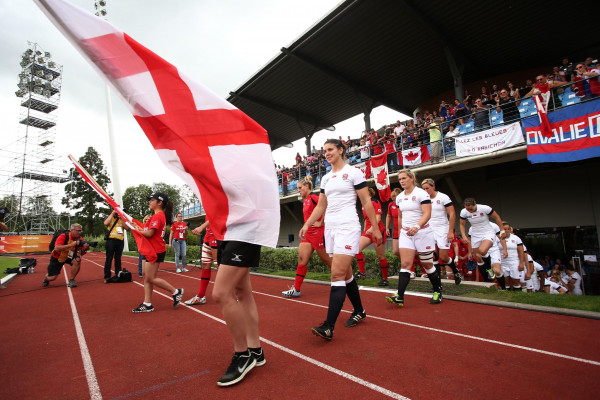 Professional. Well-resourced. Favourites. England take into the World Cup this week with the added extras of being the defending champions.

All told, there is enormous expectation on this England team to win the trophy.

The first fully professional squad ever to play in a Women’s Rugby World Cup, having been contracted for the past season, the “fulltime” status will certainly have helped England prepare better than any other squad.

But in its own way, it will also serve as a motivator later in the competition for the sides who have not had the same build-up and who will have something rather extra to prove.

This is an England squad is packed with talent and strength in depth and if form counts for anything, they should certainly retain their title.

They are the current Six Nations Champions, who earlier this year welcomed back the supremely talented Katy Mclean and Emily Scaratt to pull the strings in the back line; they have a formidable pack that can take apart just about anyone; they have an exceptional driving line out which New Zealand couldn't deal with in any way in their loss over the summer; they have players on the bench who would make most other starting lineups and they are on a 9-test winning streak which includes wins over the world's other top four sides.  This is some team.

Some 15 players who lifted the World Cup in 2014 are involved, while in a squad that contains 1,207 caps overall - four players are playing in their fourth World Cup - Rachael Burford, Rochelle Clark, Tamara Taylor and Danielle Waterman.

There is also some emerging talent to go with that experience - Meg Jones is an up and coming centre who is named in the team to start against Spain and will be well worth watching. Poppy Cleall (called up late) is a powerhouse back row who is getting better and better, and while she has been around for some time, Alex Matthews continues to be one of the best young players in the game.

There has been much focus on the RFU’s strategy in recent years.

In deciding to prioritise 7s ahead of the Olympics last year; England’s XV team struggled by their own high standards, with Ireland and France reaping the benefits of stabs at 6 Nations titles, with England’s best backs missing.

But as former England wing Kat Merchant pointed out on Scrumqueens yesterday - there has been one major upside to that strategy. England’s pack are now the most dominant in the world thanks to the extra pressure on them to carry their team through tough tests games in recent years.

That, combined with the cutting edge provided with returning backs - now with a full season back together under their belts -  makes taking on this England squad a daunting proposition.

Another major benefit of their time together is their sperior conditioning over every other side. In the final ten minutes of tight World Cup games, you feel that will count for rather a lot.

Sides will look at some of their less polished performances earlier this season - against Italy for example - and the tightness of the wins over New Zealand and Canada in the summer - as evidence that England are beatable, but it will take a great team on a great day to do it.

There has been lots of coverage in recent weeks of the RFU’s decision to end contracts after the World Cup, but you would not expect that to affect the players in the coming weeks.

If there is anything to concern England, it may be that their pool is undoubtedly the most straightforward, and with the competition going straight to semi-final knockouts, Simon Middleton may worry that his team will not be thoroughly tested beforehand.

Nonetheless, Italy and USA will certainly be ferociously physical and both will stretch England defensively, even if they will not have enough to live with them for 80 minutes.  First up England must dispatch of Spain - a side who will want to play loose and fast but who will perhaps need to take a more pragmatic approach against this England side.

In a neat moment of history, England’s pool opener in Dublin against Spain will bring back memories of their first ever Women's Rugby World Cup match, back in April 1991. Spain were also the opposition back then, with England winning 12-0 in Swansea with the infamous Gill Burns one of their try scorers.

England didn't win that World Cup but will be rightly confident that history will not repeat itself.