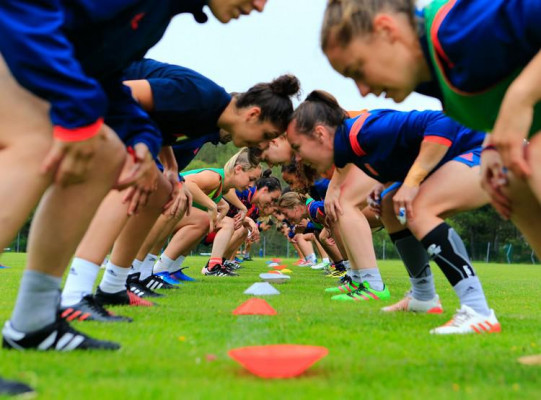 The European birthplace of modern women’s rugby, with a national league that is over 40 years old, participants in the first women’s test match, organisers of the first international test tournament - the 1988 European Championship, which directly lead to the first World Cup three years later – and hosts of the last World Cup, nowhere is there a richer and deeper history of women’s rugby than France.

And certainly nowhere does the game have a greater following. The USA and England may ave more players, but nowhere gets crowds and TV audiences to match France.

So for all of those followers, France’s World Cup history must be one of deep frustration. Seven World Cups, six semi-finals – and no final. Yet.

Before the first World Cup the French women’s union had organised- and won - a highly successful European Championship in 1988, narrowly beating Great Britain 8-6 in the deciding game. The British took on responsibility for hosting the next tournament, but after enquires from North America about whether they could take part, and attempts by New Zealand to organise a world championship, that second European tournament morphed into the first World Cup.

France were clearly one of the favourites, blitzed through the pool, but were beaten by England in the semi-finals. Officially there was no third place game, but France and New Zealand did meet in an unofficial play-off which France won 3-0. It is a game that has never been recognised as a test outside France (indeed Black Fern records ignore the game entirely) but the French issued caps to all of their players and the game still appears in French records.

They very nearly pulled out in 1994, following pressure from the IRB, but minutes before the draw confirmed their participation, again bulldozed through the pool and quarter-finals, before again losing to England in the semi-finals, this time officially finishing third.

1998 is the one serious blot of the French copybook, where a quarter-final loss to Canada and playoff loses to Scotland and Spain saw them end eighth.

Back on form in 2002 they again sailed through the qualifying stages only to lose in the semis, this time to New Zealand. 2006 followed almost exactly the same pattern.

Finally at home in 2014 France were clear favourites to reach their first final before Magali Harvey memorably stepped in to upset their plans. Nonetheless France ended with their fifth third place.

So the question is whether France can finally end this run.

Playing away from home is often an issue for the French, and visits to Ireland in particular has resulted in some tight games in recent years, so the final pool game against the hosts – which seems likely to be a near quarter-final – promises to be a classic. Earlier games with Japan and even Australia promise to be more straightforward.

France have attempted to balance their fifteens and sevens requirements over the past year, maintaining competitive performances in both the Six Nations and the World Series. Their opening 40 minutes against England at Twickenham was one of the most memorable performances of the tournament, before the fitness of the still amateur French team came up against the realities of what a fully professional team can achieve.

Which is why you fear that history could well be set up to repeat itself for the sixth time. Win or lose against Ireland, it will be a very close game and so the loser is likely to be the best second place team. And win or lose that will almost inevitably mean a semi-final against either New Zealand or England. An outcome that sounds familiar.

Camille Grassineau came into the squad as a late replacement last week after Jessy Tremouliere failed a late fitnees test for her fractured pelvis, but otherwise the team is as announced a month ago. That, however, could be is a significant loss as Tremouliere has been by a margin France’s biggest and most reliable kicker for some years – a role that has otherwise been a weak spot for Les Bleus for most of the past 10 years.

There is also clearly a not unrelated issue with 10 shirt. France have still not fully recovered from the retirement of Sandrine Agricole  and the selection uncertainty is underlined with two players - Caroline Drouin (2 caps) and uncapped Montserrat Amedee – lined up to act as stand-in for Audrey Abadie, who will presumably play most games in this vital position.

On the other hand, watch out for Shannon Izar who will be dangerous given any space for that ultimate rarity in the Women Rugby World Cup - a drop goal. Her extraordinary drop for Lille in the 2016 Top 8 final was no fluke.

“It was a tough selection process. We tried to get the best team possible by always having the collective in mind. Those who missed out are not forgotten - there's a standby list of players who will continue to prepare in case they're need," admitted coach Samuel Cherouk.

Manager Annick Hayraud, who graced the WRWC stage in her playing days, added: "The training has been short and sharp. It's very intense and replicating the levels of a test match. While they are training hard, the girls are feeling fresh both mentally and physically, and they're growing more and more individually and as a collective.

"We are ambitious, no doubt. We have shown that we want to be world champions and should not be afraid to say so."