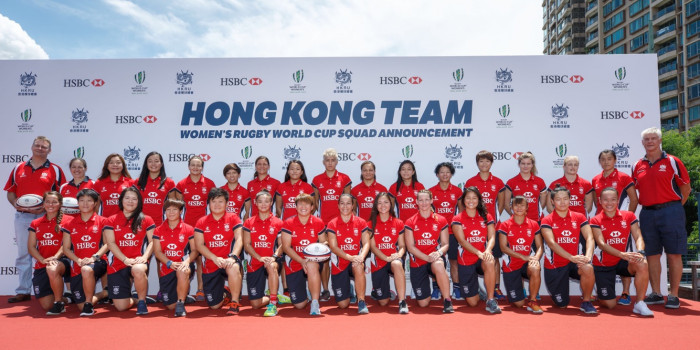 Previous World Cup:  Have never qualified for the finals before.

Hong Kong are the lowest ranked team to ever play in a Women's Rugby World Cup.

They are in Ireland after World Rugby's planned Asia/Africa/Oceania World Cup qualifier suffered the withdrawal (for various reasons) of the three strongest and most experienced World Cup teams (South Africa, Samoa and Kazakhstan) leaving just three teams with little recent World Cup experience – Japan, Hong Kong and Fiji - competing for two places. As Fiji had only played one test in ten years prior to the qualifier, it was no surprise that the two Asian teams beat them easily.

As a result, it’s hard to see Hong Kong making a significant impact on the World Cup – but perhaps that is not the point. As coach Jo Hull, after the squad was announced, said “our objectives transcend wins and losses in terms of creating our legacy. We want to inspire more girls to take up Rugby after our appearance.

“We are going to use every woman in the squad in Ireland, and that is a key to our larger goal and mission: to ensure that our first World Cup appearance isn’t our last, and to create a legacy for the game back home in Hong Kong.

“We also want to change the perception of the women’s game in Hong Kong and to show how tough you have to be, how dedicated and how resilient you have to be – rather than giving in or walking away when it gets tough. The players selected are a key to crafting that legacy.”

Although the tournament breaks new ground for Hong Kong, Hull has been here before as Assistant Coach with Scotland in 2006 and Performance Manager in 2010. She took over in Hong Kong in 2015, massively extending the national training programme and bringing in regular analysis, and strength and conditioning programmes.

Turning to her selection, Hull said that “There are not too many surprises in the final squad. We have gone with our experience and some of our more physical players that can withstand the challenge of a World Cup, but we are really excited to see the number of young players who have raised their hands during the campaign,” she added, singling out emerging players like scrumhalf Chloe Mak, flyhalf Lee Tsz-ting, flanker Agnes Chan and 18-year old centre Kelsie Bouttle.

“These players have really come into their own and are improving every game. We have rewarded that potential and it is a fantastic opportunity for them to shine,”

“The senior players will need to lead that culture-building in Ireland, while the younger players are the bridge to take this spirit back to their schools and National Age Grade teammates.”

Lock Chow Mei-nam will captain the squad in Ireland from lock. The 29-year old physical education teacher is relishing the opportunity ahead for both herself and her side. She continued Hull’s theme.

“My ambition is to be a world-class lock and the World Cup will provide a stage for me to try and achieve that. By the end of the tournament, I want the other teams to know about Hong Kong Rugby and respect us. That’s my main goal, earning that respect on the pitch.

“I just want to let the world know that the Hong Kong team is coming and trying hard to secure our spot on the world stage.”

Chow is joined by a core of experienced campaigners, particularly in the forwards, with a selection for former captain Royce Chan. The World Cup selection is fitting reward for Chan’s 13 years of sterling service to Hong Kong Rugby.

Amelie Seure, Christy Cheng Ka-chi and Christine Gordon add further experience in the pack, and provide a steady hand at the tiller alongside relative newcomers in flankers Agnes Chan and lock Chan Ka-yan.

“We have gone with some players that we know can get us out of trouble in a game,” confirmed Hull. “For a World Cup you need that balance, you have to have a team. It isn’t just about the players, the combinations have to work, on and off the pitch, to carry the team through those three weeks.

“We have also given opportunities to some X-factor players. If they get things right, players like Agnes [Chan], Kelsie [Bouttle] and Rosie [Rose Hopewell-Fong] can help us break down defences. These players also help us achieve one of our targets, which was to have a multi-functional squad, with players that are comfortable playing in more than one position.

“We are confident that we have that strength in depth we are going to need to take on three world-class teams in the space of two weeks,” Hull concluded.

The backline is anchored by vice captain and centre Adrienne Garvey, as well as other experienced players in fly-half/fullback Rose Hopewell-Fong and sevens squad members Natasha Olson-Thorne (centre/wing) and Aggie Poon Pak-yan and Colleen Tjosvold in the back three.

21-year old ‘BB’ Lee Tsz-ting has been included at fly-half as she looks to add to her eight caps, with former England Academy player Hopewell-Fong also capable of playing at ten and anywhere along the backline.

The youngest player on the squad is 18-year old centre Kelsie Bouttle who only came into the training squad in May after impressing in her first season of Premiership rugby and at National Age Grade level.

“It’s been an eye opener for me to be involved and a great motivator to develop my rugby. The World Cup will be an incredible experience,” said Bouttle.

“It’s good to be included because I am still young and hopefully have a long way to go in my rugby, so I will be in a position to share that experience and transfer my knowledge to other young players, as I am still training with the U19s,” said Bouttle, who received her first cap earlier this month.While including several full-time athletes from the HKRU sevens programme at the HKSI, the majority of the squad are amateurs, who have given up significant amounts of time throughout the campaign to train.

“These are not professional players, but they train professionally,” said Hull. “They are doctors, teachers, social workers and students, and they deserve praise and respect for the commitment they have shown.”

“The opportunity to bring my own squad to the World Cup is a tremendous honour, especially with this group of players. To coach a team like this at a World Cup is an honour and I feel a lot of responsibility because of it.

“I’m looking forward to that buzz and excitement that surrounds a World Cup. I know from my own experience that this will be the most amazing three weeks of their sporting lives and to be able to lead them through that is a privilege,” said Hull.