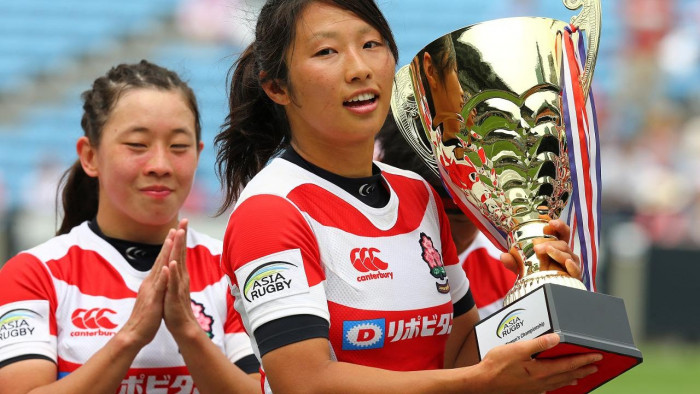 Japan have a long women’s rugby history, but physical size, experience and geographical isolation have often been a problem, especially in the early years.

They made their international debut at the first World Cup in 1991, where they lost all three of their games without scoring a point, but made something of an impression by reportedly bowing to the opposition every time they conceded a try.

By 1994 – although they had played no tests in the intervening years – they opened the tournament with their first win (and first points) beating Sweden 10-5, but again struggled against more experienced teams, losing 121-0 to then World Champions the United States, 99-0 to France, and 57-0 to Canada. They also gave Ireland their first ever international win.

After being controversially excluded from the 1998 tournament, because the IRB said they had not played enough tests since the previous tournament (an entry requirement that has not been applied to any nation since), they won the first ever qualification game in 2000 to play in the 2002 World Cup, where they showed more progress by beating Netherlands and Ireland.

Since 2002 Kazakhstan has always stood in their way, but with their absence from qualification process this time around (as well the expected opposition of South Africa and Samoa, who would have proved significant barriers), Japan sailed though as Asia’s number 1 seed. Indeed the absence of their main continental rivals since 2016 has helped Japan arrive in Ireland with the only 100% record since the last World Cup.

It is an impressive record, but not unusual for Asia’s main representative in the World Cup. Kazakhstan had a 100% record in 2014, but lost every game, and no Asian team has finished higher than 8th.

But there is reason to believe that Japan may prove to be sterner stuff. Their recent tour to Ireland and Wales showed that they could be a force to be reckoned with after they only narrowly lost two games against strong Irish selections before comfortably beating a young Welsh team. Since then they have beaten Hong Kong twice in the Asian Championship, winning 58-0 at home before – despite resting almost their entire first-team squad - winning the second leg 60-19.

The final squad is young, with an average age of 23 it is over two years younger than the next youngest (France) and over 6 years younger than Ireland. Half of players still at university. It is also the smallest team in the tournament, and second only to Hong Kong as the lightest. So it is no surprise the standout player – in every way – is also the oldest, tallest and heaviest player in the squad.

Mateitoga Bogidraumainadave, has a physical frame to match the size of her name. Of Fijian decent, this number 8 is both the tallest and heaviest player on the Japanese team. But do not let her size fool you. Bogidraumainadave also has speed - she plays sevens for Japan as well as 15s. Given a sight of the line she is extremely difficult to stop and, if she does not score herself, carves holes in the opposition line sufficient for her teammates to find a way through.

It’s perhaps unfortunate that Japan have drawn the most even pool with three teams who all have eyes on a semi-final berth. It’s therefore unlikely that they will record a pool win, but it is equally unlikely that they will record defeats of the size they suffered in 1991 and 1994. Their time may come in the classification rounds, and it would be no surprise if they recorded Asia’s best ever World Cup performance.