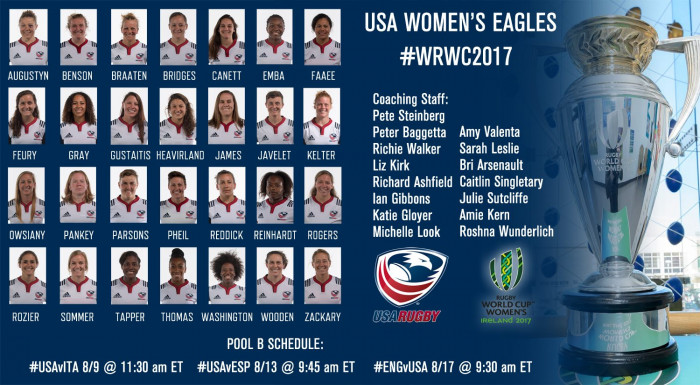 One of two countries who might reasonably claim to be the birthplace of modern women’s rugby, the United States has rich women’s rugby history. If there had been a World Cup in the 1980s the USA would have dominated the competition. Their first tour to Europe in 1985 – playing as the Wiverns (because the US Rugby Union would not let them use the name “United States”) – showed them to be years ahead in terms of every aspect of the game. Faced with this whirlwind, the rest of the world woke up and realised what they could achieve, but by the time the first World Cup did come around six years later the USA still maintained a significant advantage, sweeping to the final without conceding a point where they beat England 19-6.

Although the world continued to eat into their lead, in 1994 the USA remained a formidable team, scoring an amazing 364 points in four games on their way to the final – but this time they lost to England. Though the world was now on their heels in 1998 they again swept to the final, losing this time to New Zealand.

It all came to an end in 2002 when they lost to France and missed the semi-finals for the first time, and then lost to Australia on the way to 7th place – their worst ever finish. Defeat to England in 2006 meant they missed the semi-finals again, but rallied this time to finish 5th. In 2010 and 2014 two pool defeats put them out of contention but in both cases they rallied, in 2010 to take 5th and in 2014 6th.

Today the United States have slipped to 7th in the rankings after a tough three years that have seen them win just one test, in 2015 v Canada, but lose nine – the worst record for any team in Ireland, apart from Australia. This may have been partly because the USA management used the games to try out 34 new players, 18 of whom make the grade to travel to Ireland.

"With an experienced squad in 2014, we knew we had to get younger for this World Cup," coach Pete Steinberg said. "The shortened cycle has made getting so many players the experience they need challenging. This is a group that will need to grow through the tournament to be able to play at our top potential. It is exciting, though, to see so many players going to Ireland that will be eligible in 2021."

Of the rest of the 28, two are uncapped, while seven are World Cup veterans. They combine to produce, on paper, an impressive party – fielding one of the biggest (only New Zealand are heavier) and tallest (second only to Canada) teams.

Kayla Canett, 19, and Annakaren Pedraza, 20, are the youngest players in a squad with an average age of 27 years. Forwards Katy Augustyn (26) and Stacey Bridges (28) are the most experienced in a squad that boasts 245 caps. The uncapped players are Nicole James and Olympian Jessica Javelet.

Despite the somewhat experimental nature of recent US teams, the USA’s recent form (and the size of their defeats) cannot be entirely overlooked. It is possible that they might win their opening two games against Italy and Spain, but it is equally possible that they could lose one or both. Retaining the 6th place achieved in Paris could be a challenge.