World Rugby held a two-day women’s rugby forum in Belfast at the end of August as a part of the development of their women’s rugby plan for 2017-25, Based on information coming out of the forum it could be a very ambitious document indeed. 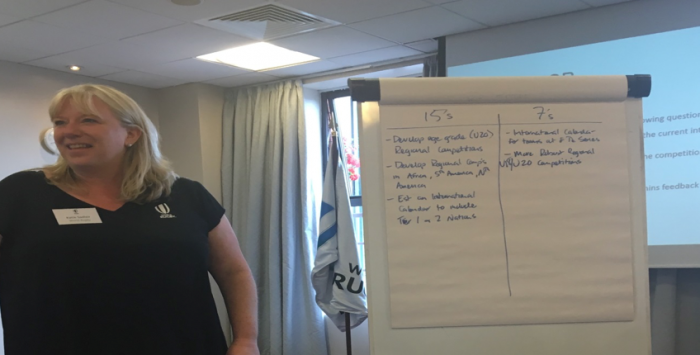 These were some of the initiatives discusses at World Rugby Leadership Forum in Belfast last month – initiatives that could become part of World Rugby’s new Women’s Rugby Plan (2017-25), which is currently being drafted before going before Council in November.

The forum included contributions from FIFA and ICC, giving example of best practice women’s football and cricket, and discussed creating a “leadership network …committed to accelerating the development of women in rugby on and off the field of play”.

As we revealed earlier this month, rugby’s continued worldwide growth is heavily dependent on the growth of women’s rugby. By 2025, World Rugby aims to have “built on the already significant growth” in women’s rugby in recent years “by ensuring equal opportunities are promoted at all levels and women are reflected in all strategy plans and structures, making highly valued contributions to participation, performance, leadership and investment in the global game of rugby”.

Xavier Torres Vouga, from the Executive Council of South America Rugby, represented the region, and has written enthusiastically about the meeting.

“Rugby is defined by the sport’s values and one of its principles is that it is a sport for all. So, it is clear that we must grow women’s rugby and from there to amplify and strengthen everything else related to our sport.

The forums included presentations from Australia about their university sevens, the growth and organization of women’s rugby in Fiji; social rugby and the success of the Get Into Rugby program in colombia, rugby in New Zealand secondary schools, "understanding what girls want", and how to make the transition from the Tag Rugby rugby's contact with the girls; and the lessons from Asia Rugby’s "Pass it Back" programme, revealing that in Laos rugby has is now seen a typically “feminine” sport.

The second part was to develop in a workshop focused on the development of female leadership.

"Some very interesting points were made," says Vouga. "It’s not about having quotas for women in leadership roles but having an objective. There has to be more women on the field, refereeing, in fitness, doping, leadership and anywhere else. Women’s rugby needs to be part of the game in every region and union.

“An example of what can be achieved, the Swedish Rugby Federation has seven Directors - four are women, including its President, and three are male.

“We should always be looking for women in leadership. We must require clubs to have women’s teams, and each union should be forced to have a woman on the board."

Philippe Bourdarias of World Rugby spoke about the need is to generate more competition, get more tournaments, more skills, and more games - especially for teams that are outside of the main tournaments, and there was also discussion about the commercial, broadcast and marketing opportunity for women’s rugby with best-practice case studies.

In the closing session, Katie Sadleir said that the development of women’s rugby is a road of no return but that we still need to change attitudes. Rugby is a sport for all, and in that sense, even commercially, the women’s XV rugby must be ever present, and it was during her presentation that the ambitious targets for test and sevens rugby were proposed.

After the event World Rugby Chief Executive Brett Gosper said: “World Rugby is committed to leading the ongoing transformation of the game, to accelerate the development of women in rugby on and off the field of play and to grow an inclusive sport that promotes equal opportunities for all.”

With thanks to Thomas Wheelock.

“We should always be looking for women in leadership. We must require clubs to have women’s teams, and each union should be forced to have a woman on the board."