The opening round of games on the 6th April 1991 pitted New Zealand against Canada, England against Spain, the USA against the Netherlands, and the French against the Japanese. 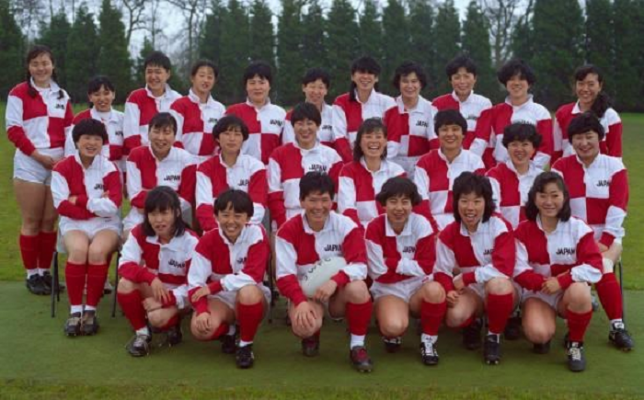 The minnows of the international rugby world in 1991, the Japanese team were mercilessly beaten 62-0 by the expert French. While France had played (and won) the first women’s rugby international match in 1982 against the Netherlands, the 1991 WRWC was the first official outing for the Japanese national team. In 1990, two Japanese clubs had participated in the Women’s Rugby World Festival in Canterbury, New Zealand, but had chosen not to form a national team to compete against the USA, New Zealand, and the Soviets, restricting themselves to the club competition portion of the tournament.

Women’s rugby in Japan was relatively young, having begun in the early 1980s with mothers of rugby playing children deciding to get in on the action. According to the press information the Japanese submitted to the 1991 WRWC organisers, within a few years “proper matches were organised between clubs started in Tokyo, Nagoya and other cities”. In 1988 these founding clubs created the Japanese Women’s Rugby Football Union to strengthen and encourage the development of women’s rugby independently from the Japanese (men’s) Rugby Football Union, which did not recognise female participation at this time.

The Liberty Fields team featured in the 2019 Guinness advert, (link?) and the club provided two of the outstanding Japanese players of the World Cup, Shihoko Watanabe and Emiko Shiozaki. The Japanese team fell first to the French, then to Sweden (0-20) and finally to Spain (0-30), failing to score a try throughout the tournament. However, their sportsmanship made a marked impression on their opponents and many of the other teams there. Liza Burgess, the Welsh number 8, recalled that the Japanese bowed after conceding every try, and threw themselves into the social side of the tournament after they were relegated, despite the language barriers.

The Japanese team’s sportsmanship, rather than their rugby prowess, marked them out on the fields of play, and the 1991 Women’s Rugby World Cup would not have been the same without them.