Kazakhstan - 2013 Asian Champions, the continent's representative at the World Cup, and a team that has never lost a test to Asian opposition - survived a shock start to the defence of their crown on Saturday. 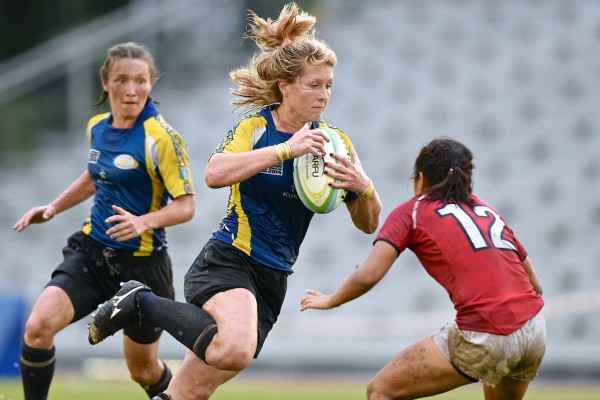 Hosts Hong Kong gave top seeds Kazakhstan a fright as they took advantage of the visitors having three players sin-binned in the first half to take a 3-0 lead at halftime.

Hong Kong will be left ruing not taking more advantage of their numerical superiority in the opening half, only managing to score three points from a penalty by winger Aggie Poon, Pak Yan.

Despite playing with fewer numbers for the majority of the middle quarters, the Kazakhstan defence held strong and Hong Kong was unable to press their advantage further until early in the second half.

Hong Kong’s second half scoring again came through Aggie Poon who added a try and conversion to push the hosts out to a 10-0 lead in the 45th minute.

Kazakhstan proved their mettle with their strong defensive effort and gradually wore the Hong Kong defence down. In the 60th minute, fullback Aigerim Daurembayeva converted one of Kazakhstan’s few penalty chances to put the visitors on the board 3-10.

Lifted by the result, Asia’s top women’s team started to exert real pressure, and scored only minutes after the restart with flanker Marianna Balashova crossing over for Kazakhstan’s first try of the match. Daurembayeva’s conversion was unsuccessful leaving Kazakhstan trailing 10-8 with 20 minutes remaining.

Kazakhstan maintained the pressure on Hong Kong and was finally rewarded for a match full of hard graft when they scored for the third time in ten minutes, this time through a try from centre Oxana Shadrina, to take the lead for the first time in the match.  Hong Kong never really threatened for the remainder of the match and Kazakhstan ran out deserved winners 13-10.

Hong Kong captain Christy Cheng, Ka Chi said, “We did better in the first half than the second unfortunately. I think we surprised them by how much we have improved since playing them last.

“We knew that we had an advantage in our fitness and made good use of it today, but we made too many mistakes in the second half.

“But today was a good result. We pushed them hard and we can now look ahead to the Japan game with confidence to beat them, given that we came so close edging the top team in Asia today,” Cheng added.

The results from Round I see Japan on top of the table with 6 points, 5 for the win and a bonus point for scoring four or more tries. Kazakhstan are in second place with five points for their victory while Hong Kong has one point (a bonus point for a loss within 7 points).