England recorded a comfortable 40-20 win over France at Twickenham to exact revenge against the side who beat them at the same venue earlier this season. 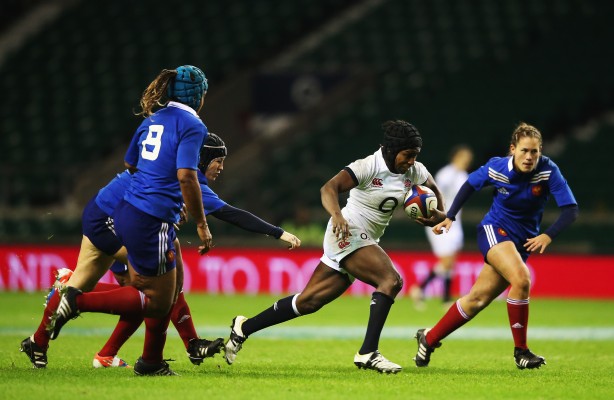 With Katy Mclean and Rachael Burford orchestrating things well in the backs, England’s absent players out wide were hardly missed as they made the most of almost all of their scoring opportunities.

Marlie Packer and Maggie Alphonsi dominated the breakdown and France, despite playing some nice tight rugby at times, were never in contention to win this one.

England began the game very well and almost scored immediately through flier Ruth Laybourn but her foot was just in touch. England continued on the attack though and full back Wilson was on the end of a neat passing move to touch down.

Mclean knocked over an excellent convertion but France it hit back with a penalty from Sandrine Agricole, kicking a penalty to make it 7-3.

Skipper Mclean finished well when Packer pushed a pass out from a turnover on 22 minutes, with the fly half scything through the French defence and racing through to touch down again.

Maggie Alphonsi, in her first appearance for England in 20 months, then scored England’s third, crashing when she was set up by Claire Allan and England were suddenly 21-3 up.

Allan was then on the scoresheet after France had turned over and despite a great tackle on Jessy Tremouliere on Laybourn, England worked the overlap well and Allan touched down.

Halftime saw Agricole get another penalty for France but England led comfortably 26-6.

5England started the second half as they did the first with Wilson scoring her second try, picking up a quick pass from Alphonsi before touching down near the posts. Mclean’s slotted the conversion to make it 33-6 but then made a rare error, throwing a loose pass which centre Marion Lievre intercepted and touched down. Agricole added the conversion to make it 33-13 with 47 on the clock.

Laybourn scored England’s sixth after 75 minutes, showing real pace to out-run the French defence and Reed added the conversion to make it 40-13, but that wasn’t the end of the scoring as France had the final word when Lievre went over for her second try, which was converted by Agricole.

Head Coach Gary Street said: "We're really pleased to get the victory, if you had offered me a 40-20 win before the game I would have taken it. We were particularly pleased with our first half performance, we perhaps eased off a litte in the second half a little but we'll address that in training this week. We put some pressure on ourselves to play well and we delivered in the most part. Canada on Wednesday is the next job and we'll be looking for another good performance there."

Player of the match Rachael Burford said: “Twickenham is a special place for us, it’s our home ground and it’s great to give something back to our fans. To score 40 points against France is a real credit to our girls. The fact that they beat us in the Six Nations was mentioned, but the focus is on the future. We’re building towards the World Cup, but our main focus is on Canada on Wednesday.”