England beat France to open life as a fully professional team positively, but they had to do it the hard way, coming back from a 0-13 halftime deficit to eventually win it 26-13. 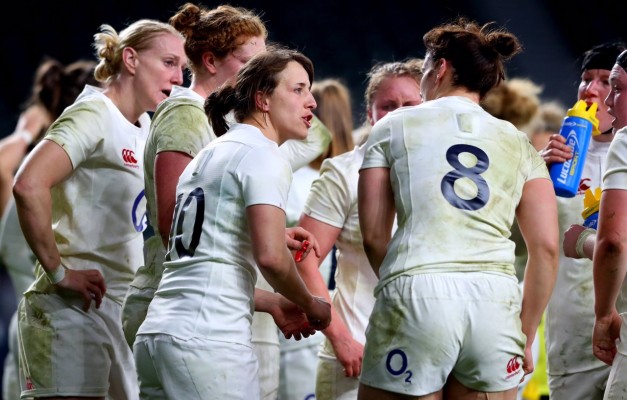 It took England almost 70 minutes to take the lead in a match of two distinct halves, but they were full value for their win in the end, finding their feet in a game that at one point looked like it might run away from them.

The first half will be one to forget for England, but their power and pace in the second half is a sharp reminder of just how good they could become over the course of the next six months as they continue to train together with professional contracts and build on their match fitness and all round conditioning.

England certainly started confidentially with plenty of possession in the opening plays but a brilliant defensive read from French winger Shannon Izar meant they were under the posts after just four minutes having conceded a try.

Izar’s pace will have been boosted by her sevens experience and her 70 metre race for the try line after intercepting a Katie Mclean pass, which was intended for Danielle Waterman, displayed impressive gas.

England came again with Natasha Hunt making smart darts but the French defence withstood a 10 minute challenge, and in the end England’s rusty looking attack in the French 22 ended with Amy Cokayne throwing a pass into touch with the England hooker taking a bang to her leg to add to her frustration.

Christelle Le Duff did a fine job at finding space for her talented backs, using inside passes to bring Izar and Caroline Ladagnous into play and she added a penalty to make it 8-0, shortly before Emily Scarratt’s effort went wide. France struck again minutes later.

Some more excellent offloading through the middle helped the dangerous looking French backs into the 22 and when a penalty was won, Gaelle Mignot signalled for the corner and an inevitable driving lineout. Over it went and Mignot of course was on hand to score it - pushing the lead out to 13-0.

England had chances to get a score back before the half, winning numerous penalties after the clock had gone red in the French 22, but in choosing the scrum, they handed the chance to France to push them off the ball, and that was it for the half.

England needed a good start to the second half and they got it with a couple of powerful runs from Scarratt and a chance for Wilson-Hardy who almost scored in the corner. In the end they had to settle for a penalty from Scarratt.

It took am excellent Waterman tackle to stop Ladagnous getting in for an almost certain score minutes later and then back down the other end it was the England fullback who then properly got her team back into it with a brilliant finish out wide after a period of England dominance. Scarratt’s touchline conversion made it 10-13 and suddenly its was game on.

The momentum began to swing England’s way as Scarratt levelled it up. England then had a go at the French try line through the pack, and despite winning the ball back, needless errors handed Scarratt another shot at the posts, this time to take the lead and she didn't need to be asked twice.

With her goal kicking in fine form, she opted for another penalty on the 70 minute mark, when on another day she might have stuck it in the corner, and she rewarded her team with another three points.

France were now being run ragged and looked exhausted as England pulled them all over the pitch. A powerful run from Scarratt then created a late score with a nice pass to Amy Wilson-Hardy and the player of the second half sealed the win with her conversion.

Replacements used: Cleall for Noel-Smith 57, Burford for Reed 57, Lucas for Clark 63, Fleetwood for Cokayne 72, Bern for Keates 72, Aldcroft for Cleall 78, Mason for Hunt 78, Scott for Thompson 78.