France finish on a high in Brive

France finished their Six Nations on a high as they powered to a bonus-point 39-19 win over Wales in a free-scoring encounter in Brive. 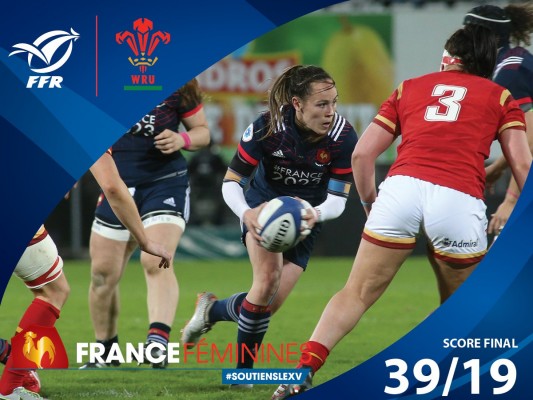 In front of a fervent crowd at the Stade Amédée Domenech player-of-the-match Jessy Trémoulière was outstanding from the boot and also chipped in with a try to finish with 19 points in all.

Les Bleues managed five tries, while Wales got three in response in a fitting finale to the Championship, which leaves the French in third.

France broke the deadlock after just five minutes with a penalty from Trémoulière but Wales responded with the first try of the game. It came from No.8 Shona Powell-Hughes, a try-scorer a week ago against Ireland, and she again showed her strength to get over.

Trailing 5-3, France moved back in front with a second Trémoulière penalty on 17 minutes before their first try of the game. It came from second row Audrey Forlani from close range after Safi N'Diaye had been stopped just short of the line. Trémoulière added the simple conversion to make it 13-5 at the break, although France could have been further in front after a great break by Romane Ménager came to nothing.

They made up for it early in the second half as Caroline Ladagnous followed up her two tries against Italy with a score in this one. N'Diaye was again key, drawing in the final defender to send Ladagnous over. Trèmoulière added the conversion from out wide as France looked to be taking control.

Wales hit straight back though, and after a clever lineout move prop Amy Evans crashed over. Robyn Wilkins converted to cut the deficit back to eight points.

The game was opening up and France had their third try soon after. Again they made headway down the left, and when it came back the other Caroline Boujard went over on the right. Trémoulière converted to make it 27-12.

Still Wales wouldn't be bowed, with Evans getting her second from close range, once more converted by Wilkins.

With 20 minutes to go it was still all to play for, but France struck for their fourth try to wrap up the bonus thanks to their maul.

It had been the Welsh lineout that had been causing problems but when Les Bleues tried a maul of their own it paid dividends with Lise Arricastre emerging from the pile of bodies. Trémoulière converted once again to push the lead back to 15.

And she capped it off with a try of her own in the final seconds, getting over in the right-hand corner.