France kept their 6 Nations title hopes alive with a 20-30 win over England at Twickenham, inflicting a first ever loss on the home side at the national stadium. 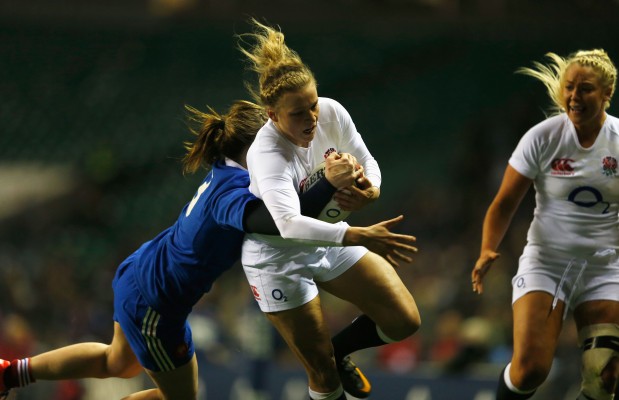 It’s also just the first time ever that England have lost two games in the history of the tournament, a remarkable record in the game.

France got off to a superb start with Caroline Ladagnous coming close to a try after just a few minutes as the visitors ran the game from left to right but England just managed to hang on.

Handling errors from both sides added to a stop start nature of the early exchanges but France were rewarded for their dominance in the first quarter with a well taken try from Elodie Guiglion. A driving lineout 5 metres out gave Marie Alice Yahe time to push a great pass out to her winger who dived over in the corner after 12 minutes.

England went right back down the other with lively winger Sally Tuson going close but finally Kay Wilson got on the end of some nice passing to level the game up and Amber Reed slotted a touchline conversion to push England ahead.

Sandrine Agricole then gave France the lead again with a very well struck penalty and seconds later Lucille Godiveau latched onto an excellent kick from her fly-half as the ball bounced cruelly in front of England fullback Lauren Cattell.  That gave France a 13-7 lead after 30 minutes.

Reed then got England back into it with a fine penalty. Some charging runs from number 8 Safi  N’diaye had England under pressure as the first half closed out and her storming run led to a try just a few minutes before the break for a 10-18 lead.

France picked up where they had left off after the break with a five-pointer from prop Christelle Chobet who profited from some excellent French backline play involving Godiveau and Marjorie Mayans.

Trailing 10-25 England needed a spark and fine run from Tuson did get them into the French 22 but the visitors held out. Off the bench Katy McLean helped provide some poise and her excellent break did have England close to the line as the home side picked their game up as the clock ticked.

N’Diaye was then sin-binned and England scored a penalty through Reed for 13-25 but time was running out.

France then put the game beyond doubt with a well worked try finished by Ladagnous, though England will rue some missed tackles out wide as she skipped over.

Emily Scott making her debut, made a superb break for England and Hannah Gallagher scored a consolation try under the posts but it was too little too late despite the spirited finish from the home side.