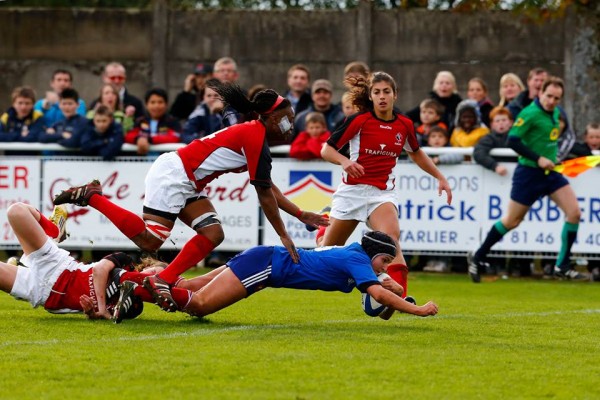 Canada, who flew to the France earlier in the week, were slow to get going and found themselves down 12-0 early in the first half after two French tries. Toronto native Ghislaine Landry made her return to Canada’s Fifteens roster and played a strong game at flyhalf.

Canada’s first try came from Bianca Farella on a tremendous run beating multiple French defenders with her footwork and speed. Andrea Burk would add the conversion to bring the game to 12-7 for the home side.
In the second half, Landry’s perfectly executed kick over the French winger would bounce fortuitously to fellow Canada Sevens star, Magali Harvey for the visiting sides second try of the game.

Farella would add another five points in the second half, with another two added off the boot of Burk, but that would be it for Canada as the final score would stand 27-19 for France.

"We are frustrated because we could have won today. Our start was not great and sometimes we had a lack of connection between each other, but I am not worried about the capacity of this group to fix it and come back stronger on Tuesday against France again in Amneville," said Francois Ratier following the loss.

"We are still in a selection process for the World Cup and it is important to give a chance to all these players to demonstrate their skills under pressure," added Ratier.

Canada will now travel to Amneville for a rematch against France on Tuesday, November 5 before ending the November Tour in London at The Twickenham Stoop against England.

​All of the tries: