France repeated their performance In Tuesday’s first test against the United States with an impressive win in the second game at Altrad Stadium in Montpellier on Friday. 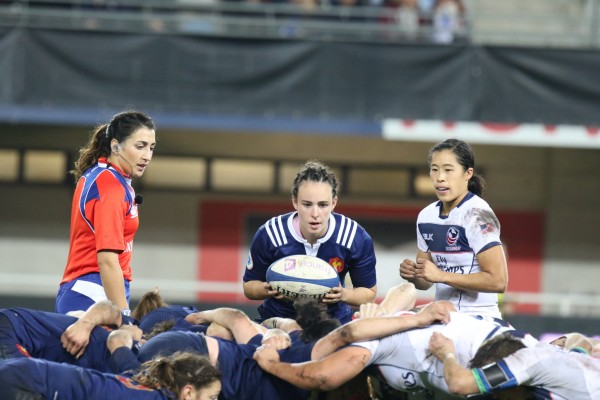 Despite several team changes, especially on the French team, the two tests followed a similar pattern with the visitors scoring first, France taking a narrow lead into the break, and then running away with the game in the second half.

In this game the US took advantage of a third-minute opportunity to them on the scoreboard when France were penalised for offside at their 22. Fly half Kimber Rozier was on target and the US were 3-0 ahead.

Soon afterwards a useful attacking position for the US was lost with a knock-on. Caroline Ladagnous, again playing in the centre rather than her usual 15,  made the ground and found flanker Pauline Rayssac with space in front of her along the touch line, her dive putting the French in front, 5-3, after eight minutes.

The wet conditions made for poor handling, with the game failing to flow, with unforced errors preventing either side from taking the advantage.

With a few minutes remaining in the half, Rozier converted s second penalty to put the US back in the lead, but a lack of concentration on the restart gave away a penalty from which a quick tap 10 meters from the line put full back Laura Delas in, giving France a 12-6 lead at half-time.

The US sought to regain the momentum when the restarted the second half, but an attempted kick ahead by Rozier was charged down by French fly half, Camille Imart, with the loose ball going their way leading to a third try from Audrey Forlani, extending the lead to 17-6.

Going down to 14 players after Naya Tapper’s yellow card gave France the advantage for a fourth try, Rozier's clearance kick away being returned for a well taken try by Elodie Poublan, 24-6.

The power of the US’s Joanne Fa'avesi, when she joined the game in the 50th minute, helped the Eagles avoid further scores while Tapper was off but fresh legs near the end from the bench helped the home team top another score, and a second from Delas for the 31-6 final score.