Spain has won their World Cup warm-up game against hong Kong at the Municipal Stadium in Medina del Campo by a convincing 41-18 - an impressive result for a Lionesses team lack any of itssevens stars, recovering from last week's tournament in Langford and preparing for their crucial final round in Clermont. 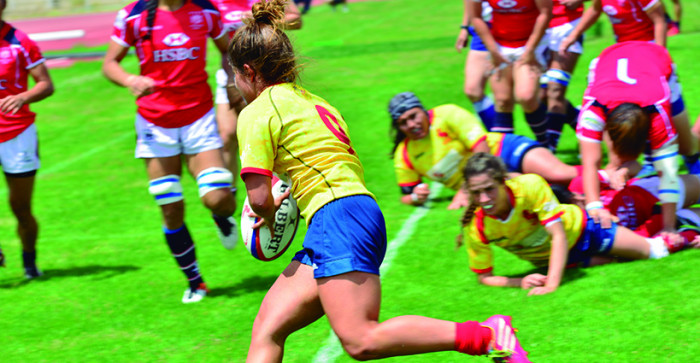 Spain beat Hong Kong 41-18 in a frenetic encounter this afternoon in Valladolid.

A disastrous start by Hong Konghelped Spain put the match out of reach early on, as they romped out to a 22-0 lead by the 30th minute.

“That start was disappointing as we had talked a lot about how we needed to get at them early,” said coach Jo Hull. “We knew Spain would come out of the gate hard and we wanted to strangle them and prevent them from getting any momentum. We weren’t able to achieve that, unfortunately, but we did well to claw our way back into it.

“Most importantly, we saw significant improvement from game one to two which was our main objective from the tour,” Hull added. A gritty effort - led by the determined defence of flanker Cheng Ching-to and the inspired attack of winger Aggie Poon Pak-yan,saw Hong Kongclaw its way back into the gamein an evenly contestedsecond half.

Poon scored all of Hong Kong’s points, opening her account with a penalty in the 33rd minute to bring the half-time score to 22-3. In the second half, the match opened up even further, with Spain starting the scoring in the 46th minute with a try to extend their lead to 29-3.

Hong Kong gained in confidence as the match wore on and were rewarded for their resiliency in the 51st minute when Poon, showing her skills as a former Hong Kong track and field athlete, turned the corner on the Spanish defence to dash away for a forty-five metre try. Poon’s try finished off a perfectly executed planned move that started from a scrum on the far side of the pitch.

The ball passed cleanly though five pairs of hands in the back-line before Poon took an inch of space and turned it into a mile. Poon’s conversion of her own try edged Hong Kong back into the match at 29-10. Minutes later, another Hong Kong foray was rewarded, this time with a penalty, which Poon slotted to narrow the gap to 29-13.

Spain stormed right back with a barnstorming attack, throwing the ball around with abandon as they trawled 80 metres before eventually creating a massive overlap on Hong Kong’s try-line to cross over for their sixth score and a 36-13 lead.

Moments later, Spain scored a final, fortuitous try to widen the margin to 41 points, leaving Hong Kong in danger of conceding a bigger loss than in their 2015 test match, a 49-12 defeat in Madrid. But Hong Kong re-grouped to marshal a final attack on the Spanish line and Poon stepped up once again, collecting a well-timed pass from fullback Colleen Tjosvold to flash 25 metres and drag three defenders across the line for a second try. Poon’s conversion was unsuccessful leaving the final score at 41-18.

One of the goals of the tour was to expose the squad to more high-intensity matches and that goal was met this afternoon as Spain were relentless in attack.“Our tactical kicking still wasn’t good enough today,” said Hull. “We let them play too much rugby and we let their nine and ten get too involved. There were periods that we managed their pressure well, but our challenge now is to turn that 50 minutes into 80 minutes. But, overall, it was an improved performance against a much stronger side than the mid-week game.

“We were more accurate in our attack and we had less handling and unforced errors, despite a big increase in the intensity of the game, so I’m pleased with that, This experience will absolutely hold us in good stead. Since we left this group has shown significant improvement and we have capped five new players on tour, which is vital for us in extending our squad ahead of the World Cup,” concluded Hull.

The squad will return to Hong Kong on Monday to start preparations for their upcoming Asia Rugby Championship home and away series with Japan in July.