Ireland snatched a last play win against a revitalised Scotland to open the 2017 Six Nations. 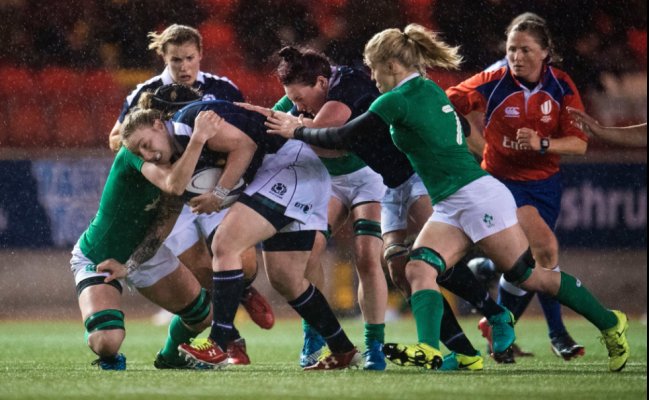 It wasn’t perhaps the most technically accomplished performance by Scotland and Ireland, but the TV audience and those watching worldwide on the live stream were treated to a tense and exciting game, where the lead repeatedly changed hands and either side could have won right up to the final play.

Two years ago, at the Broadwood Stadium Ireland lifted the Six Nations crown with a 73-6 win – but this is a very different Scotland. Ireland were thrown on the defence from the start, Scotland were soon camped on the Ireland 5m, and after just four minutes Jade Konkel found the gap to put the home team ahead with Scotland’s first try against Ireland since 2011 – the first of many records to fall over the evening.

Six minutes later Ireland were on the board with Alison Miller just touching down in the corner, but with the kick missed Scotland kept the lead until 22 minutes when, moments after Ireland missed a try after Paula Fitzpatrick knocked on when over the line, gathering the ball from the back a ruck, Miller again made the corner, putting the visitors ahead 10-7.

This was by far Ireland’s best period of the match. They had settled down after a tough start and it looked like the game might move back to the expected script. But, no sooner did Ireland appear to take control than they lost it again. A carbon copy of the opening four minutes followed, with the same outcome. A second try for Jade Konkel, and Scotland were back in the lead 12-10, which became 15-10 before halftime as Ireland’s error and penalty count rose.

Ten minutes into the second half a yellow card for Scotland’s Lindsey Smith allowed Ireland to pull level through Lindsay Peat.

For most of the remaining 30 minutes Scotland were largely on top, but penalty opportunities were narrowly missed and as game entered the final minute still tied. Ireland launched one final attack, won a penalty on the Scots 5m line. With the referee saying this would be the final play, kicking into the corner was not an option for Ireland – so they ran the ball, which found its way to Jenny Murphy who crashed through the Scots line.

Scotland had put in their best Six Nations performance perhaps since their last win seven years ago – and, by winning the first ever Women’s Six Nations bonus point, also picked up their first championship points since 2010. But Ireland had the win.

Replacements used: Park for Malcolm 39, Dougan for Konkel 60, Bonar for McCormack 63, Maxwell for Law 63, Konkel for Dougan 63, Lockhart for Balmer 67.