Italy stunned Wales to score in the final minutes of the game to snatch an 11-12 win in the opening round of the women's 6 Nations at the Talbot Athletic Ground. 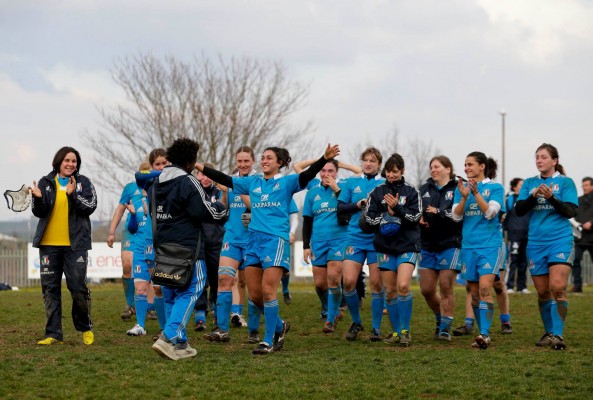 Wales completely dominated the first half where Italy managed to exit their own half only twice, but despite Wales' total domination on the pitch they only had a Lowri Harries try and a Robyn Wilkins penalty to their name at halftime.

Italy proved an entirely different proposition in the second half as the bigger pack rumbled into gear. While Wales showed plenty of endeavour and adventure in attack in the first half, it was their staunch defence which kept their lead intact in the second spell.

However the rearguard was finally breached in the 61st minute when hooker Melissa Bettoni crashed her way over after a sustained period of pressure. Michela Sillari's excellent conversion put Italy just one point behind and suddenly their self-belief was visible.

Wales edged further ahead when debutant Robyn Wilkins kicked a penalty in the 64th minute but with Italy's juggernaut pack being urged forward by scrum half Sara Barattin at every opportunity, Wales' defence was being forced to work overtime.

Eventually Italy managed to work their way towards the corner flag and with four minutes remaining flanker Ilaria Arrighetti delivered the killer blow when she powered her way over from close range.

Wales rallied in the dying minutes but the driving rain made handling a lottery and when Sioned Harries spilled the ball forward, Italy gleefully took the honours.

In defeat, Wales newcomer Wilkins had an exceptional game on debut. She attacked the gainline with gusto and her well timed passes put her outside backs into space to give wings Laurie Harries and Philippa Tuttiett along with full back Dyddgu Hywel plenty of opportunities to run at the Italians.

"It's a tough one to take to be honest," he said. "The way we were playing in the first half we maybe should have been 20 points ahead to have the game in the bag by halftime.

"In the past when we've played any Italian team if we're not two scores ahead there's always going to be a chance for them. We talked about the next score being a game changer either way. Once Italy get a sniff it always turns into a bit of a battle.

"I don't think the ball went passed their scrum half in the last 20 minutes - we just knew it was going to be a case of holding on but unfortunately we weren't able to hang on."

Italian reaction was somewhat different. "I'm really happy for them, the girls and all the staff. Winning here was not easy "said Andrea di Giandomenico, "but we defended well in the first half and in the second half we played more in their half and the fruit of this can be seen. We have pressured their defense, and so came the two tries that gave us the victory."

"The tournament has started well for us but we must work to improve the things that did not go as hoped. Beatrice Rigoni had a good debut at fly-half, not an easy game but certainly positive. Also the entire team was able to work together after the difficulties of the first half , " echoed Maria Cristina Tonna " I am proud of the success. We have achieved an important milestone. Winning outside Italy is always precious and important. Now we wait for the recovery of injured players to continue the journey in a tournament that will become increasingly difficult . "