Namibia hosted Botswana on Saturday in what was, for both teams, their first test match. Would the home team's fifteens background be enough to over come their visitors international sevens experience? 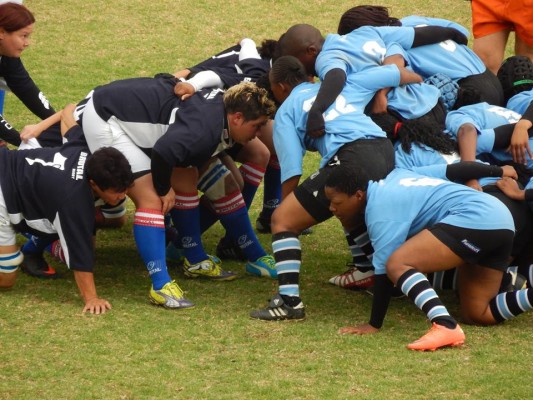 In an entertaining match, Namibia were always in the lead, scoring five tries to two. They took a 14-0 lead at halftime and although Botswana managed to close the gap to 19-10 midway through the second half, Namibia had the final say as they ran out comfortable victors in the end.

A double strike of two tries in three minutes gave Namibia a 14-0 lead on 14 minutes. First flyhalf Yaneke Lawrence opened Namibia’s account with a fine try when she cut through Botswana’s backline to touch down and convert her own try.

Two minutes later Namibian left wing Neskineth Jansen received the ball on the wing after a quick backline attack and touched down, with Lawrence adding the conversion with a fine kick.

Namibia dominated possession and nearly scored twice more through Jansen and fullback Christelle Kotze but on both occasions the ball was dropped with the tryline beckoning.

Botswana started the second half strongly with an attack from the kickoff and when they won a penalty close to Namibia’s line, eighthman Kelebogile Bagwasi powered over for their opening try.

Namibia soon replied through another try by Jansen after a great backline move put her away in the corner, and although the conversion was wide Namibia stretched their lead to 19-5.

Botswana struck back with a try by captain and centre Tjeludo Monyai, but Namibia had the final say as substitute back Latetia Slamet scored two tries in the final stages.

The first came from a 10 meter penalty that went down the line and the second when she pounced onto a loose ball and showed a fine turn of speed to score from 40m out.

The game came as the climax of a momentous year for Namibian women's rugby - but Chief Executive Officer of the Namibia Rugby Union (NRU) Sakkie Mouton says the rugby union still needs to encourage more young women to play the sport.

The NRU has been working hard to include a women’s rugby competition and it was realised this year when a women’s 15-a-side rugby league was introduced. The league initially started with six teams, but only four teams managed to finish the league. At the end of the season, two teams, namely Western Suburbs and Reho Pandas qualified for the final which was won by the Reho Pandas last weekend.

The Pandas defeated Western Suburbs 19-10 to become the first side to win the women 15-a-side championship - which was played before the men’s MTC Premiership finalat the Hage Geingob National Rugby Stadium. “Women rugby should be encouraged and with that we should put structures in place and also change the perception that rugby is only a sport for men,” said Mouton.

“We will also have to look for finances to invest in the women’s programme because the teams need financial support to make it.” According to Mouton, the NRU will look at introducing a sevens rugby competition next year as it was “cheaper” to run than the women’s 15-a-side game.

“It will all depend on how the clubs feel about it. We will listen to their input and we will implement what they prefer. The 15-a-side game is very costly and it was evident in the women’s league this year when some of the clubs could not finish the season due to a lack of funds as well as the unavailability of players. At least with sevens rugby, you can have a lot of players and it is also a sport that is growing in Namibia. It can also be introduced in schools,” said Mouton.

(With thanks to The Namibian and Namibian Sun)