Swiss win a shot at glory

On a stormy, rainy summer day in Prague, history was to be written as the Czech and the Swiss Women’s 15-a-side national teams squared off to capture the last remaining Qualifier spot in the Women’s XVs European Nations Trophy to be played in October 2014. The visiting team went into the game as the favourite on paper, having won the last two confrontations between Switzerland and the Czech Republic. The annual Series between these two teams, the Konnektor Cup, named after the Czech company sponsoring its trophy, thus far held a 2:0 record for Switzerland, reports Swiss Head Coach, Veronika Muehlhofer. 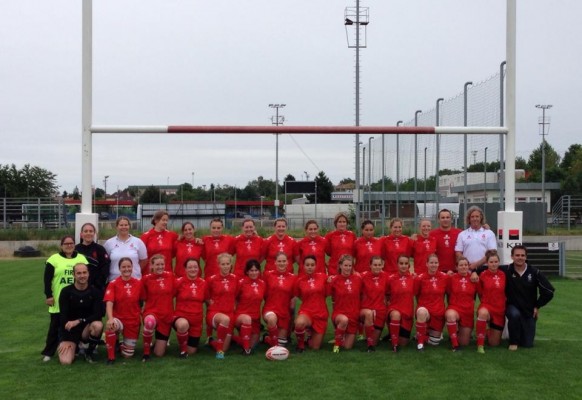 The Swiss team had a strong start right from its kick-off, keeping the Czechs deep in their own half for the opening phase of play. Their initial effort paid off quickly, when the Swiss forward pack pressed across the Czech tryline, where Hooker Angela Diener touched the ball down in the 4th minute of the game for Switzerland’s first try. The match then continued to a similar tune,  the visitors better able to cope with the strong wind and lashing rain, keeping the ball in their forwards for longer periods, only opening the game out wide on choice occasions. After 17 minutes of play, the Swiss scored their second try in similar fashion as their first, with flanker Sarah McNamara touching down in the other corner this time. In the second 20 minutes of the opening half, the Czech team started to see more ball possession, and looked dangerous on numerous occasions, when their dynamic backline nearly darted through the Swiss defence on several runs. However, the Swiss rush defence held fast, leaving the home team few options under the pressure and the wet weather than to use the kicking game. At this they proved adept, and it paid off when they closed the opening half with 3 points on the board thanks to a well-taken penalty kick by fly-half Barbora Bendovà. The first half thus closed with a score of 3 - 10.

After the break, the weather started to clear and the rain and wind all but died down. This suited the hosts’ game better than the conditions of the first half, and they came out of the break strongly, posing some serious questions to the Swiss defence. However, conditions also suited the Swiss attack, who now shifted the focus more and more into its backline. In a series of piercing runs from inside center Rahel Bosshardt and fullback Carole Casparis, the Swiss team offered great support at each play, with outside center Simon Haymoz touching down for 2 tries in a row at the 46th and 58th minute. Despite letting the opponents back into the game with a series of penalties, the Swiss team’s pressure defence held fast, and did not allow much play to develop in the opponent’s dangerous backline.

In the 65th minute, Swiss Fullback Casparis capped off a strong performance with a try of her own, and winger

Selina Fux closed the scoring in the 76th minute with a penalty kick, making the final score 3 – 32, and qualifying Switzerland for the Rugby Europe Women’s European Nations Trophy in October 2014.

Congratulations go out to both sides for a great match, and to the match’s referee Dana Teagarden (right) for a brilliant conclusion to her international refereeing career.