Uganda “should have won”: Spencer

Former England captain Cath Spencer was in Kampala for the second leg of the Elgon Cup series between Uganda and Kenya last weekend – and was impressed by her hosts, despite the eventual result. 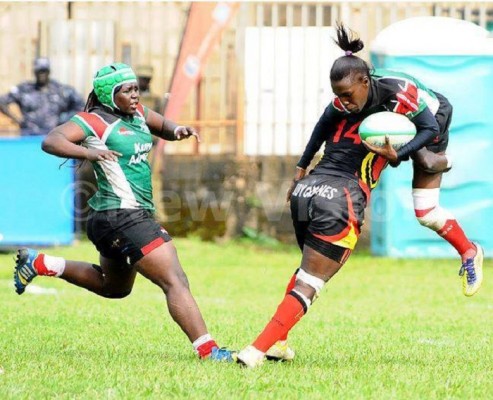 Uganda lost the Elgon Cup to Kenya last weekend by the narrowest of margins, but their performance and potential impressed Cath Spencer and members of the Sussex University team who are in the country with the Tag Rugby Trust (TRT).

After a 5-5 draw the previous weekend in Nairobi, Uganda were narrow favourites to regain the trophy. Although in the return they had most of possession, but were generally unable to turn that into points. Nonetheless they did finish the first half with a 3-0 lead thanks to a penalty by Rachael Kakaire.

At the start of the second half Kenya reorganised their pack, changing both props, in an attempt win more ball, and it had the desired effect with Sinaida Aura going over for what was to be the games only try 13 minutes after the restart. Crucially for such a tight game Janet Awuor converted – a vital score because within ten minutes Uganda reduced the gap between the teams to a single point, Kakaire again converting.

Uganda battered the Kenyan line for the remaining 15 minutes, but to no avail with Kenya winning the game 7-6 and the cup with 12-11 aggregate.

Sussex University and Sussex county head coach Gavin Richardson was nonetheless impressed by what he had seen:

“I was really impressed by Uganda’s number 9 Samiya Ayikoru – she’s got huge potential. Uganda have a really strong defence, they had most of the possession, attacked for most of the game and were really did not deserve to lose.”

Ex-England captain Cath Spencer, who is also in the country working for TRT agreed:

“I’ve followed Ugandan women’s rugby since about 2009, and it was really pleasing to see the performance they gave. I definitely think they should have won the game and I’m sure they’ll be kicking themselves that they didn’t. But on a positive note it was very promising, the potential is clearly there. They had a young team out and some of the players really impressed me. Number 8 Charity Atimango is a really strong runner. Number 14 Emmanuella Oroma made some great tackles as well. With a little bit more time together as a squad I’m sure they’ll beat Kenya next year, and potentially rise through the rankings. There’s loads and loads of potential there.

“In terms of the day itself, there was a great atmosphere. The numbers watching (over 1000 for the women’s game) was really pleasing to see.”

Uganda – and Kenya – will now switch formats to prepare for Africa’s Olympic qualification tournament in Johannesburg at the end of September.