With the title now England's to lose, we look ahead to round three of the women's Six Nations. 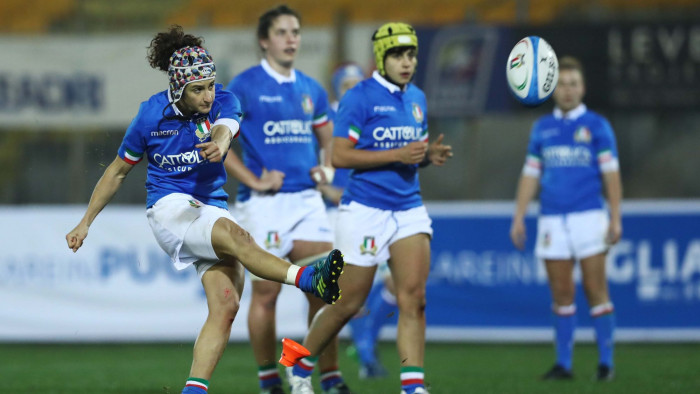 England travel to Wales this weekend as odds on favourites to win not just this year's Six Nations title, but the Grand Slam as well.

It would take an upset of heroic efforts to stop them and having dispatched so easily of Ireland and France - though the players will claim differently - England are unlikely to be troubled significantly by Wales this weekend.

Interest in the Championship in many ways now shifts away from the top of the table, and is more about about the best of the rest and perhaps on how much England use the remaining games to build their depth.

On paper, Italy do represent a challenge given they are the only other unbeaten team in the mix, but in reality they will struggle to match England and France and look more likely to be targeting third place once again.

This represents probably the most interesting clash of the weekend and may well be the closest.

Italy will be kicking themselves for all the chances they blew to win the game against Wales last time out and had to settle for a draw, while Ireland were much better against Scotland and scored a well deserved win.

On paper the Irish will be up against a tough Italian defence that has only leaked two tries in two games, but in reality Ireland will offer much more in attack than the two sides they have faced so far. For Italy, the form of Giado Franco means they finally have a power go-to runner up front and with their well organised set piece, and nous in the backs in the form of Michala Sillari and Beatrice Rigoni, they present an intriguing challenge.

Ireland are boosted by the return of Alison Miller who makes them a more potent threat out wide while Anna Caplice and Leah Lyons were in such good form last time out. If those three, plus Claire Molloy and Ciara Griffin can be at their best, then Ireland can certainly be confident of coming home with all the points on offer.

Adam Griggs has made just one change to his team with Kathryn Dane makes her first start of the tournament coming in at scrum half. On the bench there is a huge boost with the return of Lindsay Peat who is sure to feature at some point.

On paper this is an ideal game for France to recover their confidence after the battering against England and so even more so than usual, this represents a daunting task for winless Scotland.

France showed glimpses late in the game against England of the very reason they were considered favourites by many at the start of the tournament, but they were blown away early on and they will surely have learned some very harsh lessons about how to approach big away games.

It doesn't get any easier for Scotland, who have England and France to come after losses to Ireland and Italy. They will be hoping for a better performance and they have been hugely boosted by the return of Jade Konkel who is one of four changes.  The others see Nicola Howat  replace Debs McCormack, Rhona Lloyd return to the right wing in place of the unavailable Liz Musgrove, and Sarah Law start at scrum-half.  Konkel starts at number 8 and though she is short of game time, she will offer a strong ball carrying presence.

With France no longer having sevens clashes to worry about, they have made five changes including returning Emma Coudert to the number 10 shirt while Doriane Constanty in the backs starts at fullback after a very impressive cameo off the bench last weekend.

In the pack, Dhia Maylis Traoré replaces Lise Arricastre at loosehead, while behind her Audrey Forlani comes in for Lenaïg Corson and Coumba Diallo starts in place of Céline Ferer.

England captain Sarah Hunter has spoken this week about the respect England have for Wales, and while of course this will be true, it doesn't mean that England won't travel to Cardiff expecting nothing other than a win.

At this point they are simply too good for the rest of the Championship, and the question for Simon Middleton now is if he uses the remainder of the competition to build depth in his squad. The World Cup is still two and a half years away so the time is ripe in games like this this to start looking at players with an eye on New Zealand in 2021.

Wales have made five changes to their team including a full debut for 18 year old  flanker Alex Callender, while Mel Clay returns at lock after recovering from a leg injury. Teenagers Manon Johnes and Natalia John drop out while in the backs, there are further changes, with 50-times capped Elinor Snowsill starting at full-back.

Hannah Bluck will start at inside centre and Jess Kavanagh starts on the left wing in place of Lauren Smyth, Alicia McComish and Lisa Neumann respectively.

Coach Rowland Phillips said: “Alex has impressed coming off the bench in both our Women’s Six Nations games so far and deserves a chance to start.

“Manon Johnes and Lauren Smyth have been excellent since making their international debuts in the autumn but they are 18 and 17, and it’s a case of managing their progress. Alex Callender is also 18, so it’s fantastic to be blooding so much exciting young talent at the moment.