We look ahead at round 4 of the women's 6 Nations with all the team news as and when we have it. 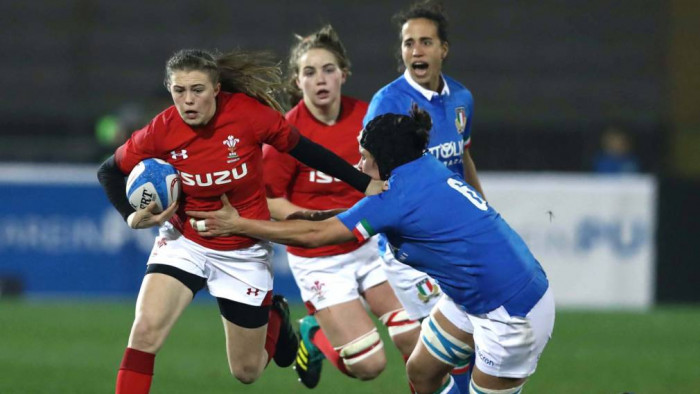 This game is closing in on ticket sales close to 10,000, justifying the decision to take England games out of London and may well bring a record crowd for the RFU for a standalone women's match. Given these are the only two remaining unbeaten sides, this should bring a fantastic atmosphere to the ground.

Finally on Saturday evening, Ireland will take on France at Energia Park, Donnybrook in Dublin with both teams looking to keep the pressure on the top two.

With both teams winless, though Wales did secure a draw against Italy, both will see this as prime opportunity to pick up a precious win and there was only a point between these teams last season.

Wales have made two changes from the side that lost to England. Lleucu George gets the call at inside centre as she makes her first start as a back for Wales. She has previously featured for her country in the back row against Hong Kong at the last World Cup, but has since been playing in the back division for Cardiff Met University and Scarlets.

The other changes sees Lauren Smyth comes in at full-back, completing the back-three alongside Jasmine Joyce and Jess Kavanagh. Personnel in the pack are unchanged but Beth Lewis and Alex Callendar have switched flanks, either side of Siwan Lillicrap.

Scotland have made changes too. Rachel Malcolm’s return to the back-row sees Sarah Bonar move to lock as Nicola Howat drops to the bench; while Mairi Forsyth comes in at tighthead, with Megan Kennedy shifting to the other side of the scrum as Lisa Cockburn also drops to the bench.

The only change to the back division sees Mhairi Grieve take over from Sarah Law, who picked up an injury in training last week, at scrum-half.

Head coach Shade Munro was pleased with a  step-up in his side’s performance despite a heavy defeat to France last time out.

“We’re similar in terms of where we are in terms of world rugby – they’re sitting eighth so they’re slightly better than us in terms of world rankings, but all the games over the last three, four years have been very tight. They’re playing quite well this season, they’ve a very physical pack, but there’s nothing new there either, that’s the way Wales play and that’s not going to change.”

The clash of the two unbeaten sides in the competition is likely to be played in front of a crowd of around 10,000 in Exeter, a record for a standalone women's test game in England.

While Italy have been excellent to watch in this competition and fully deserve the high praise they are recieving, it should be noted how kind the fixtures have been to them this year, with their toughest games against England and France still to come. Nonetheless the win over Ireland really was historic and the manner in which it was achieved - with Italy playing some superb attacking rugby, means this team are well worth the entry fee to watch.

They will not beat England but they may well cause them enough problems for this to be much closer than any of England's games so far, and with Giada Franco, Sara Barratin and Manuela Furlan on outstanding form, surely this will be more of a contest than England have yet faced - including against France.

England have had it so embarrassingly straight forward so far that you imagine even they would relish a close contest. They will not of course agree that they have had anything easy, but no-one has come anywhere near them so far.

England bring back captain Sarah Hunter and Emily Scarratt in two of the more significant of their five changes. The others see Lark Davies will start as hooker while Leanne Riley and Gloucester-Hartpury’s Kelly Smith will both make their third starts in this year’s competition as scrum half and left wing

Middleton said: “We are hugely excited about this upcoming game and are under no illusion that it’s going to be a tough contest. This is just as big a game for Italy as it is for us and they will be going into this match well-organised and energised.

The two sides last met in the 2018 Six Nations where England defeated Italy 42-7.

Beatrice Rigoni will switch to fly-half as one of two changes for Italy. Jessica Busato comes into the side at centre. The only other change to the starting XV, which will be captained by Manuela Furlan, sees Federico Ruzza come in for Valeria Fedrighi in the second row.

France were very good, without being excellent in the last round and knowing that England pretty much have the title sewn up makes their final two games on the road interesting.

It is too much of a cliche to suggest that France rarely perform on the road, but it is so often the case and Ireland, having beaten France before at home, will feel they have more than a chance here.

They will however be without two  key players for the rest of the Six Nations with both Leah Lyons and Michelle Claffey ruled out.  Claffey has had ankle surgery and Lyons has an A/C joint issue and after the loss to Italy, they are players they would much rather not lose at this stage. Their team is yet to be named.

The big news for France is the return of World Player of the Year Jessy Tremouliere at fullback. Injured for the Autumn tests, she travelled with a French development 7s side down under in January and has been nursing herself back to full fitness.

That she comes straight into the team says much about the value in which she is held and her return along with the move of Pauline Bourdon to fly-half, are the two key changes this weekend. Bourdon is a brilliant attacking 10 and will create a huge challenge for Ireland's defence, though she is less experienced there in the French shirt, while Tremouliere offers another kicking option and brilliant back three experience and capabilities.

Manager Annick Hayraud said of the six changes:   “Injuries have impacted our choices in this team selection, including another one yesterday. So we have to adapt and call on players who have been doing well in the league.

“We expect a better performance than the one against Scotland. Yes we scored 40 points, so from a results point of view, it was good, but in the manner we can be better, lose the ball less and concede fewer turnovers and handling errors.

“We need to be more demanding in those areas and also avoid conceding two tries like we did against Scotland. I expect the girls to raise their level against this Irish team.”

As well as Trémoulière there are three other changes in the back line as Caroline Boujard comes onto the wing, Yolaine Yengo starts at outside centre and Yanna Rivoalen gets the nod at scrum-half, with Pauline Bourdon shifting to No.10. In the pack, Céline Ferer starts in the second row in place of Safi N’Diaye while Lise Arricastre is back at loosehead prop.

There are five changes for Ireland, who are licking their wounds after the loss to Italy.  Uncapped Enya Breen is to start in the centre alongside Sene Naoupu.  Up front, Deirbhile Nic A Bhaird makes her first start of the tournament at hooker, alongside Laura Feely and Fiona Reidy. Juliet Short returns to the squad, starting in the second row alongside Nichola Fryday. Captain, Ciara Griffin moves to flanker with Claire McLaughlin starting at number.  It means a surprise shift to the bench for Anna Caplice, who ahs been excellent in recent weeks.