All the team news as we get it for round three of the women's 6 Nations this weekend. 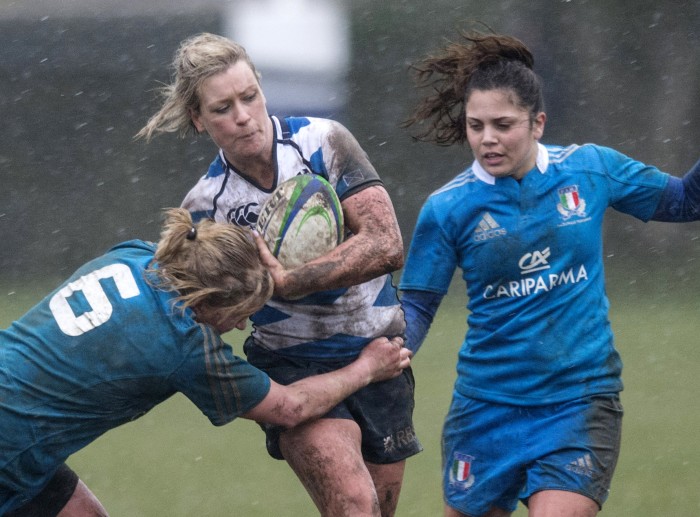 This match not only marks the midpoint of this season's championship but also the 20th anniversary of Scotland Women's first ever fixture, also against Irish opposition, on Valentine's Day 1993 which the Scots won 10-0.

The Scotland side sees lock Becca Parker move from the bench to the starting XV and back rower Kelly Shields coming on to the bench for potentially her debut cap. Head coach Karen Findlay is under no illusions as to the strength of this weekend's opposition: "Ireland had a fantastic win at home against England and undoubtedly, given the rugby they have played, are deserving of sitting top of the table. They've been building season on season to achieve that kind of result, so fair play to them.”

Ireland Coach Philip Doyle has kept faith with the starting XV and replacements that overcame England in their last outing of the championship a fortnight ago.  Speaking ahead of the game, Doyle said:

"We are really looking forward to this weekend, it’s all about meeting the standards we set out against England. We have named the same XV as we are looking for consistency now to our game."

England Head coach Gary Street has made three changes to the starting line-up while on the bench the experienced regular skipper Katy McLean comes back in from Sevens duty, having featured sparingly in Houston in the last round of the World Series.

Emma Croker, Rebecca Essex and Lauren Cattell come off the bench to start having impressed late in Ireland last time out.  Croker replaces Victoria Fleetwood at hooker, Essex comes into the second-row in place of Rowena Burnfield and Lauren Cattell will start at fullback with Kay Wilson moved to wing. . Lichfield No. 8 Sarah Hunter will once again captain England with scrum-half La Toya Mason named as vice-captain. The game is being shown live on the BBC Red Button.

For France, there are a number of significant changes. As predicted the front row is a complete change from Wales, with Hélène Ezanno and Christelle Chobet both starting at prop, as well as Laëtitia  Salles at hooker.

However, less expected is the switch at 10 where Sandrine Agricole starts in place of Jessy Tremouliere - despite the former's 20 points in the first half against Wales. Caroline Ladagnous also remains at full-back. Agricole is likely to take over the kicking duties, but is not as strong or reliable in this department as Tremouliere or Aurelie Bailon, whose absence through a broken thumb continues to be a problem for the French.

"Jessy Trémoulière did not follow the guidelines against the Welsh", coach Nathalie Amiel is reported as saying, "therefore she will be a substitute on Saturday. She was too selfish, despite her 20 points. In addition, she failed to control her emotions. She is still young and lacks experience - you can get away with such mistakes against Wales, but it will be another matter against England at Twickenham,  with all of the pressure."

The result is a team that is experienced but also apprears to show some caution on the part of Christian Galonier - an alternative to Agricole might have been Julie Billes, for example - a young but highly rated specialist fly-half. The result is a starting team whose shape is similar to that that played at Worcester two years ago, when the absence of a strong kicker capabale of clearing the lines and relieveing pressure proved costly. By avoiding gambling with youth France are running a real risk this could happen again.

However if the young French backs get a chance to run they could be exciting. Jade Le Pesq in particular has been a great addition to the backline, with tries in both of her games to date. Notes on the French squad

This is a huge clash in terms of World Cup qualification. Wales are yet to register a victory in this season’s campaign while Italy have been the surprise package, defeating France and Scotland to surge into second place in the points table. Wales coach Rhys Edwards has made two changes to the backline which lost heavily in France.

Sea View’s Rafique Taylor will get her first start for her country on the wing, replacing Caryl James while Laura Prosser is preferred to Amy Day at scrum half. Influential flanker Sioned Harries suffered an ankle injury against France which has forced a reshuffle in the back row. Experienced campaigner Catrina Nicholas returns as blindside flanker with Nia Davies moving to the openside while captain Rachel Taylor replaces Vicky Owens at No 8. The only other change is in the front row where Jennifer Davies gets the nod ahead of Megan York at loosehead prop