France picked up the first bonus point win of the 2020 Six Nations with a six-try win over Italy, who still managed to score their first points in France for 10 years. 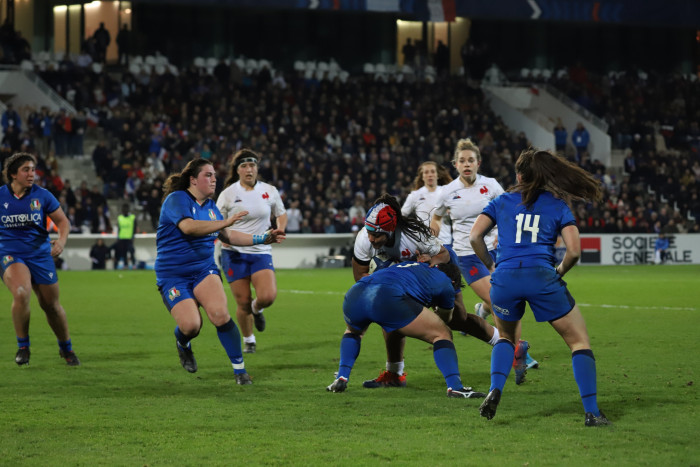 Despite beating France three times in their previous eight meetings, Italy had never won in France and never looked like changing that record in Limoges on Saturday evening.

A strong start by France nearly resulted in an early try after Marine Menager was held up after a strong run after just three minutes, but from the resulting 5m scrum the ball a ruck was set up in front of the posts from which poor Italian defence allowed Forlani strolled through the middle to score the opening try after just five minutes.

A penalty from Tremouilere, and then a well taken try on the win by Banet and France were 17-0 up after 16 minutes with Italy barely setting foot in the French half.

After this whirlwind start from France, Italy finally managed to put some phases together and after 25 minutes won a penalty for a high tackle, getting their first points on the board.

Italy continued to look dangerous, but a turnover on the French 22 saw the ball moved quickly to Banet who sprinted away to score her second try and extend France’s lead against the run of play. 24-3, after 32 minutes.

The final minutes of the half saw France battle for the bonus point try – but it was Italy who scored. And interception by Sara Barattin just outside her own 5m line saw her sprint the full length of the field to score their first try in France for 10 years. 24-10 was the score at halftime.

The second half began with a fourth – and bonus point – try from France. A classic French score, with a lineout leading to a maul from which Julie Annery broke away to score. 31-10.

After that dramatic start the game lost its way a little, before France ended the game with two more tries in the final five minutes, with a penalty try followed by a score from Laure Sansus to end the game with a 45-10 win for France.