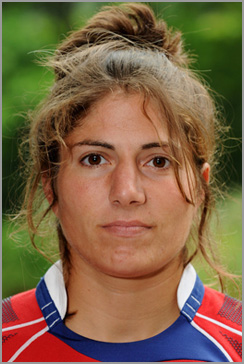 Do you play any other sports? I love to rock climb and I used to play softball when I was younger.

What celebrity would you invite to your birthday party? Adam Sandler

Who is the last celebrity you'd invite? Chris Brown

Which sporting figure do you most admire from outside of rugby?' Wes Welker

If you could have any TV box set, what programme would it be? Seinfeld.

You would do 10 laps to avoid doing? Bear crawls

What car do you drive? Black Jeep Wrangler Sport

Any nicknames and why. I've always just been Mel.

What's your signature dish if cooking? I make a mean turkey melt.

What other sports teams do you follow? The Patriots, the Red Sox and lately the Celtics

Song you would listen to before a match: Carol of the Bells

An interesting fact about yourself: I grew up on a small farm where we always had at least a dozen chickens. I loved the chickens and used to stack them up in "Milkcrate Hotels".

If you could change one rugby rule what would it be? That's a tough one. Especially because I am pretty happy with how the ELV's ended up. It would be interesting to see how attack from the base of the scrums would evolve if the Scrumhalf couldn't defend past the tunnel. It would potentially mean harder work on defence and potentially more quality ball to the backs...

Best rugby moment? Beating Canada in the 2009 Nations Cup and defeating New York in the Semi-Final of Club Nationals 2007

And the worst? After making a comeback and getting ahead in the second half, losing to Berkley in the 2007 Club Nationals Final.