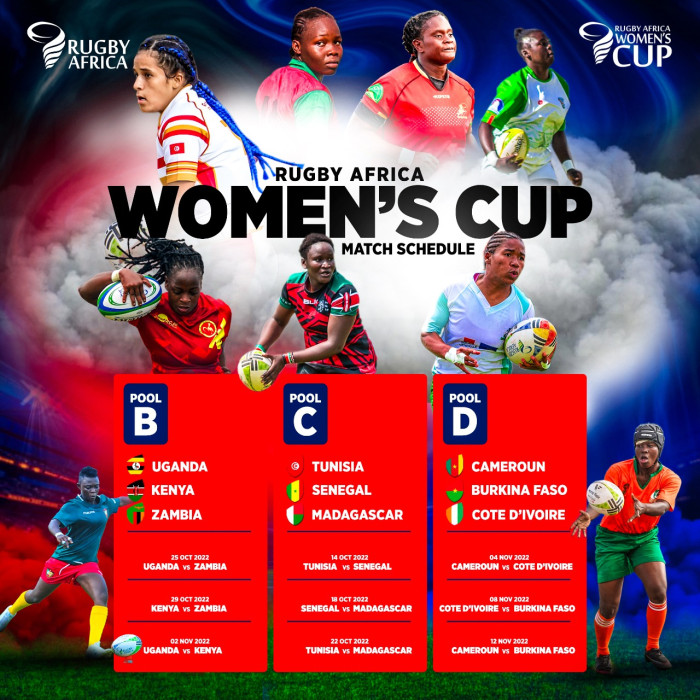 The last World Cup in 2017 had no African entrants for the first time in over a decade. Few African nations had ever played test rugby, and even those who had played regularly had largely abandoned the XVs format. The Elgon Cup between Uganda and Kenya had been a regular fixture in the calendar since 2005 but had largely fallen into abeyance; Botswana and Namibia are played one game in 2013 but never returned to the pitch again, Zambia and Zimbabwe had also dipped their toe into test rugby a decade before but never returned, and even South Africa had pulled out of the format, declining a near guaranteed spot at the 2017 finals.

But five years later 12 nations are competing for four places in next year’s Rugby Africa Women’s Cup, from which two will go on to play in the first WXV competition.

The tournament has been in the planning for some years. In 2019 four nations – South Africa, Madagascar, Uganda and Kenya – took part in an invitational “Africa Gold Cup” that had been intended as the first step towards a continent-wide tournament, but COVID put everything on hold.

As rugby returned last year a number of two- and three-team series took place, giving teams a chance to discover or rediscover their test rugby feet, and this week fully competitive African Cup gets properly underway this week.

The 12 teams have been split into four largely geographic qualifying pools, of which one – Pool A – has already been played, due to South Africa’s participation in the current World Cup.

South Africa beat Namibia and Zimbabwe to win qualifying Pool A back in June, and now over the next few weeks the other nine teams will compete in tournaments in Tunisia, Uganda and Cameroon to decide who the other three qualifiers will be.

Pool C – Tunisia, Senegal and Madagascar – gets underway first, on Friday, when Tunisia host Senegal. Madagascar meet Senegal next Tuesday (18th) before what is expected to be the decider – Tunisia v Madagascar – takes place on Saturday 22nd.

Three days later Pool B – Uganda, Kenya and Zambia – gets underway, reaching its climax on 2nd November when Uganda and Kenya will renew one of women’s rugby’s oldest rivalries.

In truth, it is very hard to see South Africa not lifting the silverware in the finals next year and taking a place in WXV2, but a regular annual tournament – and a chance for the runner-up to play in WXV3 – is going to advance African test rugby, and in years to come perhaps a rival to the ‘Boks may well emerge.