All Ireland League Round 7 wrap

UL Bohemians stretched their unbeaten record this season to  seven wins from seven games over the weekend in Round Seven of Ireland's top league. 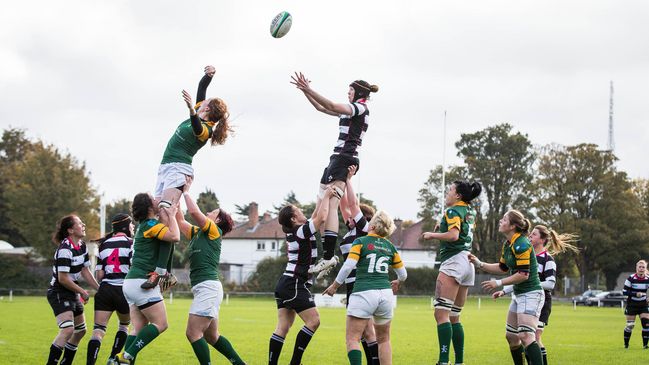 UL BOHEMIANS stretched their unbeaten record this season to  seven wins from seven games with a 33-14 victory over Cooke in Belfast over the weekend.

The league leaders got off to a flying start with fullback Áine Staunton running in the first of her four tries, securing the try bonus point for her team single-handedly. All of UL Bohs’ points came through Staunton and hooker Edel Murphy, who is the radar-guided kicker for the Munster side and got in on the try scoring action, diving over the line from a five metre scrum following a fantastic run by winger Kate English.

Winning manager Maeve D’Arcy was thrilled with her team’s performance especially the strength in depth from the bench.

“Four of our players were held for international duty so I’m delighted we got the win and that the girls were able to step up from the bench and from the seconds team. It is a long season this year with the home and away matches and having that depth is important.”

Cooke’s manager Grace Davitt found plenty to work on for the return fixture in a fortnight but the tenacity displayed by the northern side pleased her.

“UL Bohs came out all guns blazing and got three tries before we got up and running. It was a much more even second half and the fight shown by the girls in looking for the try bonus point was great, even if we fell short. We know what we did wrong today and we will work on it for the next two weeks. It’s great to have the opportunity to get a second bite at them so quickly,” Davitt added.

Old Belvedere’s first half performance helped them come away from Galway with a slender win that puts them into a clear second place in the league.

Jenny Murphy continued her road to recovery with a virtuoso performance, demonstrating that the Ireland star might be ready to return to the international side after her injury lay-off. The Kildare woman scored all 13 of her team’s points to help them race into a 13-0 half-time lead.

Galwegians fought back in the second half with a try from Emma Cleary, converted by Claire Rafferty who also scored two penalties, getting the home team within three points of the lead and claiming a losing bonus point.

Stephanie Barman, who only took up rugby last year, starred at flanker for Old Belvedere on her first start for the senior side.

Ciara Cooney’s return from the injury she picked up in last year’s Six Nations tournament was capped with a try as Railway Union ran riot at Templeville Road, running in nine tries.

Scrum half Ailsa Hughes was responsible for three of them while Aoife McDermott, Sinead Taylor, Meg Kendal, Katie O’Dwyer and Lindsay Peat all helped themselves to a try apiece.

The bonus point victory helped them climb over Blackrock into that all-important fourth place in the league. Despite their 25-17 defeat of Highfield on Saturday afternoon, the Dublin side slipped below their rivals on points difference.