Alphonsi on race, rugby & what needs to change

With the spotlight firmly on race in sport,  we speak to former England star Maggie Alphonsi, who is using her influence in the game to make long-lasting change. 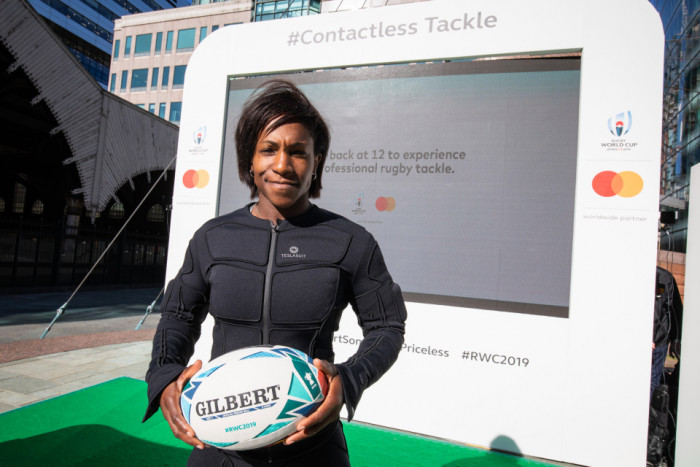 The death of George Floyd, the subsequent protests around the globe and the support for the Black Lives Matter movement has generated significant debate about diversity within sport over the last few weeks.

The lack of visible Black leaders across the vast majority of sports has been challenged and debated, while in rugby, there have been powerful discussions about experiences of racial inequalities playing the game in England in particular.

But there has been a lack of female voices in the debate, with limited discussion in particular about the challenges in women’s rugby, where Black players feature far too rarely in the elite game in England.

Alphonsi, who is six months pregnant, reflects on how she has felt in recent weeks.

“What has happened has been deeply upsetting and obviously it is disappointing that we are still dealing with racism and injustice on this scale.

“What is has allowed though, is for a conversation to take place, and for many people those conversations are uncomfortable, but they are happening finally.

“It has made me personally step back and think too – all going well I am going to give birth to a mixed-race baby in three months’ time.  So with all of this going on, I  have been asking myself how best I can help shape this little boy to understand the challenges and solutions around all of this. It has just been a really poignant time."

Through the majority of her outstanding playing career, with 74 caps, a World Cup title and seven 6 Nations titles, Alphonsi was England's only Black player, though when she joined the set-up in 2003, the picture was much more diverse with Paula George, who is mixed-race, captaining the team and Maxine Edwards, who would take on the captaincy, a leading Black player from Alphonsi's club Saracens.

“To be honest, when I was starting out in rugby when I looked at the team and when I saw Paula was the captain it was just huge. There were other sports I was interested in at the time but that was a really big draw to rugby. I saw myself reflected there and it made everything possible for me.”

“But after they left, it was mostly just me and even now there are very few players in the squad representing BAME communities - Shaunagh Brown has probably been the most prominent. When I was coming to the end of my career, I felt like I needed to keep playing so that there was at least one person that young Black girls could see in the team who looked like them. It’s the same with broadcasting – I keep in there because there are so few Black women out in front of a camera and because visibility is so massively important.”

Influencing from the inside

Among other roles, Alphonsi is now on England Rugby’s powerful Council – the only Black person among its 61-strong membership and one of just a handful of women.

Preferring to influence from the inside, rather than simply point out problems, Alphonsi is however not shy of pointing out the Council’s glaring weaknesses when it comes to diversity.

“It isn’t good enough that I am the only Black person on the Council, though I do believe there is a genuine want from the game to change things, and I want to be in there to make that happen.

While much has been made about the diverse make up of the England men’s team and the growing number of young boys taking up the game from Black and other ethnic minorty backgrounds, but the focus on the record of the women’s game on this front is not quite so sharp.

“That has felt quite noticeable,” Alphonsi reflects.

“There has obviously been a huge focus on growing the women and girls game and that’s happening across lots of sports– not just rugby, and because the numbers are going up, the uncomfortable conversations about the ethnicity within those numbers has been largely absent.”

Visibility is an issue Alphonsi repeatedly returns to, with her view that to really close the ethnicity gap at grassroots and then elite level, there has to be a proper understanding of how to engage women and girls from diverse backgrounds and to have role models who look like them.

“The outreach work the game does in inner-cities or in communities where there are high numbers of Black people or say Asian people,  needs to be led or supported and influenced by people who look like and reflect those communities in my view. Young girls want to look up and see that there are people who understand what it feels like to be them. There are some really very good rugby projects going on to target specific groups, we just need much more targeting within the women and girls work.”

Telling the stories of those  women and girls who have broken through is also important in her view.

“Definitely, there is a lot more we can be doing to shine a light on the women who are playing our sport who don't look like everyone else.  They are role models to entire sections of society who would never otherwise consider or get the chance to play rugby. We need those players to talk about their journey and their experiences because too often we see the same faces talking about the women’s game.

“This isn’t just a challenge for BAME representation– the women’s game isn’t diverse enough at all in the conversations it has and the stories it tells. It’s the same when it comes to LGBTQ players or people with disabilities who are involved in the game. We only seem to start telling those stories when there is a problem we are seeking to address.”

Alphonsi acknowledges that her abilities as a player – she is still regarded by many as the best player to have played the sport – shielded her from some of the challenges other Black players may have faced.

“If you are good at sport people sometimes can see past your skin colour and rugby doesn’t have the same challenges as other sports when it comes to racism, though that doesn’t mean it isn’t there. I was a prominent player on a very good team and I didn’t honestly experience the sort of challenges and racism other Black players talk about. I was Maggie Alphonsi – a very good rugby player in a winning team. I experienced sexism probably more than anything else.

“But the reality is that just because I didn’t hear or see it doesn’t mean it wasn’t happening in other ways. When we would go to certain countries and I would be the only Black person in  the entire travelling squad including all the coaches and support staff, I would be very conscious of my skin colour and conscious I stood out.

“There are some places – like when I went to Moscow to the 7s World Cup to watch– when I felt very uncomfortable and other times I would just be acutely aware that I was often the only Black person in an entire ground at some games when I played for England. I never really talked about that so I doubt my teammates even considered it was an issue for me.”

“The country I felt most comfortable in was France – it always felt that their team reflected their communities a bit more and at times I felt more comfortable playing in France than in some parts of England.”

As for what the game can do next, Alphonsi, who is writing an MBA thesis on the issue of the representation of BAME people in leadership roles in rugby,  could talk for hours about what needs to change.

“There is so much more we can do in rugby.  One issue is looking at the pathways to how people get into positions of influence or leadership. If you take the Council for example, we have to find other ways for people to get on there.  The route now is not necessarily the best one for getting diverse voices and faces on there. I got on there because the then President Jason Leonard had a pick and asked me – otherwise I wouldn’t have gotten near.”

“That is another thing – it shouldn’t be like this, but we need advocates in positions of influence to reach down and pull BAME people up. That’s what Jason did for me. We need people to understand the power they have to make massive change when they are in those positions and to do things like open up their networks to help people less likely to ever have access to the same people and influence.”

Like many, Alphonsi has seen false dawns before in the fight against racial injustice, but she feels this one is different.

“I really do feel it is the start of something different and better. If you look at the history of women’s liberation and empowerment it often took massive moments like this to make real change – most recently the Me Too movement is a good example of that. This feels like one of those moments for race relations and the injustice that goes alongside it.”