Even without the Women’s Sevens World Series in Clermont, it would have been a busy weekend ahead. 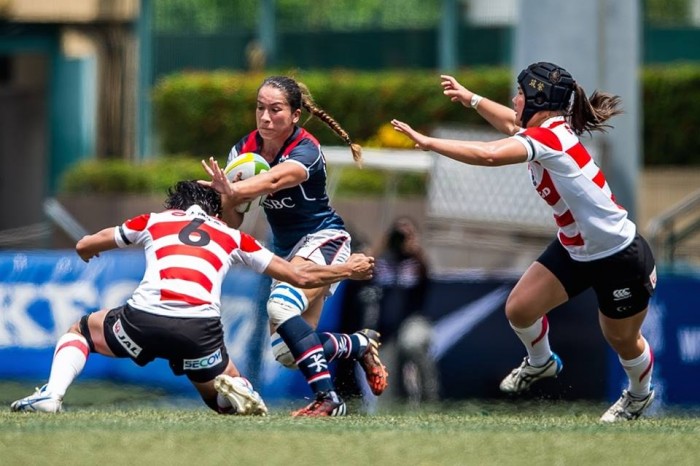 With the late withdrawal of Kazakhstan, this year’s championship is down to a two leg match between Hong Kong and Japan. Japan won the opening leg 39-3 in Hong Kong, so will be red hot favourites to retain their title.

Despite the uphill task ahead of them there is plenty for Hong Kong to play for – not least the experience that will be vital ahead of the Asia/Oceania World Cup qualifiers where two places in Dublin will be available. Samoa or Fiji will be third team in that qualifier.

With that in mind Hong Kong coach Jo Hull has made one change to the starting XV that defeated Singapore 40-7 a fortnight ago. Lock Cheng Ching-to comes on to the ground and Claire Forster moves to the bench to make way, while Nam Ka-man and tighthead prop Lee Ka-shun also come in on the reserves bench.

Hull said the changes have been made predominantly to reward players for good form and she is looking to her charges to carry on some of the momentum they picked up against Singapore.

“From the Singapore game, we took a lot of positives about what we can do and what we’d like to try and implement against a harder defence against Japan,” she said. “It’s given them a boost and I think it just gave them an opportunity to play a little bit more against Singapore. Going into to Japan it’s now all about transferring those skills.”

“It would be good to win the Asia Championship, but that’s more of an outcome for me,” Hull said.“Our goal in this game is our specific areas, because that’s how we can measure improvement as opposed to points for and against at the end of a tournament. The key thing is improvement. We’ve talked about improving every time and that’s an absolute must. The result is important but the most important thing is that we improve on performances in some key specific areas that we’ve identified against Japan.”

The performance of centre combination Natasha Olson-Thorne and Rose Fong Siu-lan will be crucial to Hong Kong’s chances, while fly-half Lai Pou-fan should also have a big say on proceedings.

“Having Rose and Natasha in the centres, if they operate well, they could be a real good strike power both in attack and defence,” Hull said. “That is what are aiming to do, create a bit more space, hopefully, this week. In terms of the development, I’m hoping we can go out and put on a performance that really inspires young kids to play the game,” she said. “I’m not sure we did that against Japan at home so we’ve got a job on our hands Saturday.”

The match takes place at the Prince Chichibu Stadium in Tokyo, kick off 11:00 a.m. local time.

The World Series may have moved on from Amsterdam to Clermont, but the women’s sevens tournament in the Dutch capital has a much longer history and remains an important fixture in the European sevens calendar.

Scotland, Czech Republic, Poland, Finland, Norway, Ireland Development, Switzerland and Germany, as well as the Dutch themselves take part in a 12-team tournament that will be an important part of preparations for the European Championship, which starts next month.

For the Dutch – playing as “Windmills” – this will be their third tournament, although the Windmills side has varied in its make-up as coach Sascha Werlich builds her team. Amsterdam should be the strongest team so far and close to the European Championship team, which was announced this week:

In their most recent outing, last weekend’s Howard Hinton 7s in France, the Windmills came fifth behind French Universities, China, French Development and Tribe and ahead of Belgium and Tunisia.

Other teams likely to be vying for the title include Scotland, Germany and Finland. This will be Scotland’s first outing as they attempt to get back to top level European Grand Prix after relegation last year. Coach Graham Shiel will choose from his training squad, announced last month:

Germany, also relegated last season alongside Scotland, will be looking to build on their good showing in the Stanislas Sevens. They team for Amsterdam has not been announced, but should be close to the one that played in Nancy at the start of the month:

Finland – apart from the Dutch and Irish the only Top 12 Grand Prix team in Amsterdam – finished fifth at the Centrale 7s , beating the Windmills on the way. Their squad is unchanged:

May in England has been all about the County Championship, and after four weekends 24 starters have been whittled down to just two - Surrey and Lancashire – who meet in the final at Twickenham Stoop on Sunday, kick-off 12:00. While Surrey had a relatively straightforward 34-10 win over Berkshire in last week’s semi-finals, Lancashire went down to the wire with rivals Yorkshire, booking their place in the final with a dramatic 12-10 victory.

It’s also the second leg of Italy’s Seria A semi-finals on Sunday, but after Monza’s 52-9 away win in Bologna at least one of the finalists looks assured.  Valsugana Padua look likely to make it an all northern final after giving the southern pool winners Caravaggio Benevento their first defeat of the season last weekend (29-0). However, the return is in the south, so all is not quite lost.

And in other news…

Skewen proved that they are the strongest womens club team in Wales by backing up their Premier League Championship win earlier in the season by running out resounding winners of the WRU Womens Cup and securing the League and Cup double.

The exceptionally powerful Skewen side secured their victory thanks to tries from Shona Powell-Hughes, Larissa Muldoon, Jess Smith, Adi Taviner and Laura O'Shea, with Keira Bevan converting three of the tries. To their credit the Falcons never gave in and replied with two tries of their own through impressive flanker Sioned Davies, with Brogan Jones converting one of those tries.

The first post-Olympic women’s (sevens) championship in Brazil is being cut from six to three tournaments next season. The reason is a lack of finance, though the explanation for that may owe more to the political turmoil in the country as post-Olympic funding cuts.

All Brazilian national sporting competitions can apply for "Lei de Incentivo ao Esporte", a system by which companies to allocate a percentage of their taxes to sports. This is administered by the Ministry of Sport who – partly as a result of going through three ministers in five months – have delayed approvals giving the Brazilian Rugby Union little time to seek extra funding.

That said, the funding cuts do appear to have hit the women’s game harder.