Another blow for the Black Ferns

The Canada women’s rugby tour of New Zealand has been cancelled. The tour was due to be take place in April with Canada playing the Black Ferns twice. It had been touted by the NZRU as the main build-up games for the World Cup for the Black Ferns, whose main representative competition, the NPC, was axed by the union due to financial constraints earlier this year. 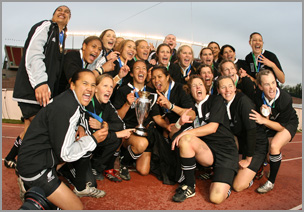 The Canadian players were informed internally this week that thecall to cancel the tour was in part due to adecision in New Zealand to forgo the fixtures due to budget constraints and a desire to focus on internal competitions. This is despite the decision by the NZRU earlier this year to cancel the country'shighest levelrepresentative competition- theNPC.

At the time, just two months ago, theNZRU general manager of professional rugby, Neil Sorensen said: "The Black Ferns have got a very strong programme this year. We've got two internal tests against Canada, we've got lots of camps and trials and we're confident that the programme we've got for our girls will hold us in good stead."

The decision to axe the NPC had been slammed by current and former Black Ferns includingex captain Farah Palmer who said it could effectively kill the game in New Zealand.

Thecancellation of the Canada tour means that theBlack Ferns do not have any scheduled international games between now and the Womens Rugby World Cup in London this summer.

The decision effectively means that the world champion Black Ferns may not play another international team till they travel to the World Cup and without this years NPC the team will rely on merely internal camp training to prepare for the event.

Canada on the other hand have enjoyed extensive preparation games with the Nations Cup last August offering up four matches against South Africa, the USA, France and England. In November the Canadians split in a pair of test matches against France, and over the Christmas holidays, again split a series with the USA.

Instead of the New Zealand tour in April Canada is planning a domestic based camp this summer, bringing top national team players in from the UK back train with their country team magtes.

Rugby Canada have put out a statement which says the decision was mutual and cancelled due to both sides re-evaluating pre World Cup plans.

*Scrumqueens.com was awaiting a response from the NZRU at the time of posting