Another record defeat for NZ

England ran out 56-15 winners over New Zealand as they inflicted back-to-back defeats on the Black Ferns for the first time since 2012, writes Milly McEvoy, 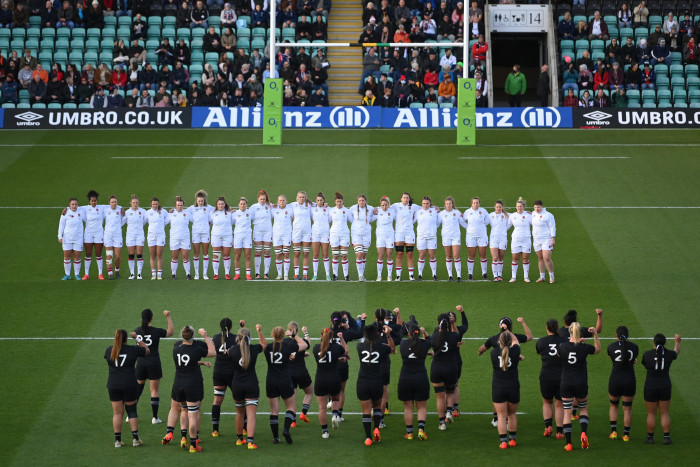 The Red Roses raced to a four-try lead at half-time as New Zealand were unable to deal with both England’s pace and power with Ellie Kildunne crossing and Amy Cokayne dotting down twice.
The hooker sealed her hat-trick just after the break and New Zealand hit back through Portia Woodman and Stacey Fluhler, before Leanne Infante, Lark Davies and Abby Dow went over for England to ensure victory.
As the game got underway, Helena Rowland was straight into the action having been promoted from the bench, using the width of the pitch as the Red Roses looked to create early chances.
It took only eight minutes for Cokayne to get England’s first, dotting down from a rolling maul as last week’s player of the match Zoe Harrison got the conversion.
Three minutes later they were in again, set up by a pin-point kick into the 22 from Infante.
The resulting lineout then set England on a break to the left and Kildunne found the ball in her hands and a gap in the New Zealand defence, it was never going to be anything other than a second England try.
With less than 17 minutes on the clock, England were 21-0 up and had a player advantage as Kendra Cocksedge was sent to the bin for what was deemed as illegally disrupting a pass between Leanne Infante and Lydia Thompson as the Red Roses were awarded a penalty try.
No more tries came during Cocksedge’s ten minutes off the pitch although there was a break in play as Grace Brooker hobbled off in serious discomfort.
There would be time for one more score for England before the half was over, as Cokayne went over for her second, again from a rolling maul as Harrison nailed her third conversion of the afternoon.
Last weekend England led 17-0 at half-time, this time the Red Roses had again shut out the Black Ferns to lead 28-0.
And matters only got worse for New Zealand after the break as Cokayne got her hat-trick, again from a maul.
The Kiwi response finally started 51 minutes in with Portia Woodman going over for the Ferns’ first points of the game, as Cocksedge missed the conversion.
England deployed their finishers with 35 minutes to go, but it was Infante who had been dictating play all afternoon and she would get the try, stealing the ball from the back of the lineout and found free space and the white line for England’s sixth of the afternoon.
Infante could have had another were it not for Woodman's try-saving tackle as Infante intercepted New Zealand’s ball and set off on a break from the halfway line, but was tackled into touch.
England wouldn’t have to wait long to get their seventh score, the maul again in use as replacement Lark Davies went over to continue where Cokayne left off
French referee Aurelie Groizeleau then carded Sarah McKenna for disrupting play just as she had deemed Cocksedge had earlier.
Olympic Sevens champion Fluhler made use of the extra player, breaking down the wing to score and crack a smile.
Dow finally earned her try after a number of breaks, this time running 30 metres down the left wing to get England over fifty points as Harrison converted her eighth before Woodman got a final consolation for the Black Ferns.